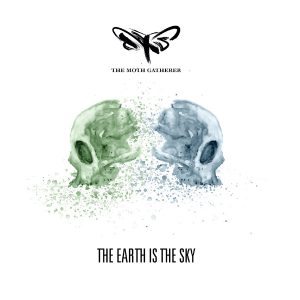 Released on November 27, 2015 via Agonia Records

The possibility of complete ecological collapse seems to be something that’s on the mind of a lot of metal bands these days. Which is understandable – if you’re going to be preoccupied with anything then the end of life on earth seems a worthy enough choice. Maybe listeners of heavy music are living up to their gloomy, pessimistic stereotype. Or perhaps metal is just the ideal soundtrack to end times – few genres can sound so all encompassingly massive, so evocative of a world crashing down. On their 2013 début A Bright Celestial Light – which didn’t bring a great deal of originality to the post-metal table, but made up for it with sheer conviction – The Moth Gatherer had more personal matters on their minds. On The Earth is the Sky (because without an atmosphere we don’t have a world) they’ve expanded their horizons to the downfall of humanity.

And they start out with a sound ever bit as huge as it needs to be. ‘Pale Explosions’ is unfortunately marred by the sudden appearance of clean vocals that might conjure memories of the tail-end of nu-metal in metalheads of a certain age. But they are at least a brief occurrence. The rest of the track is as pummelling and relentless a post-metal track you’re likely to hear his year, brimming with Neurosis style ferocity. The vocals are delivered in a ragged bellow that sounds desperate and lost – lines like “Everything we love we leave behind” are howled in the manner of a man in the grip of true existential terror, stopped in his tracks during his weekly shop, wide-eyed and terrified as his dropped produce rolls around his feet. The follow up ‘Atacus Atlas’ is even more ferocious, dabbling in early Baroness style shredding to spice up its ceaseless blunt-trauma assault. It drops out into a period of subdued electronics before bursting back into life, a trick Cult of Luna fans in particular will be very familiar with. They let themselves down by repeating it again before the songs end, the second time an exercise in diminished returns.

Then the album takes an odd turn. The electronics take a bigger role in ‘Probing the Descent of Man’, an instrumental reminiscent of early 65daysofstatic, managing to ape their trademark bend of propulsive rock and strange melancholy to great effect. They follow this with a second instrumental in the shape of the almost ambient electronica of ‘Dylatov Pass’. Such a huge and unexpected stylistic shift is quite a gamble – committing to an alien genre out of the blue often comes across as the work of dilettantes, a pale imitation of better bands they’re stretching towards. But The Moth Gatherer surprise here by nailing the atmosphere of an Autechre or a Four Tet at their most straightforwardly sorrowful perfectly. At least one of these three must have a side project in this sort of stuff – such an accomplished piece can’t be the result of a passing whim. The trouble is the sequencing is bizarre. These back-to-back instrumentals take the record in a very different direction and take them down an avenue they don’t seem to know how to get out of. It’s almost as if they’ve split the 6 track LP into a 3 act structure, with this being the darkest-before-the-dawn bleakness before the potential redemption of the denouement.

If this were a movie they’d say it has, ‘third act problems.’ The riffs come back with a vengeance on ‘The Black Antlers’, the most straight up aggressive track on the album, but it’s peppered with a weird, croaky vocal delivery that plain doesn’t work. I’m not sure if they’re pitched as doom or back metal vocals but they sound like a shlocky sci-fi/horror b-movie bad guy voice. Any hopes it’s just an odd intro fade as it inexplicably lasts the whole of its 8 minute run time. And so what could have been a solid track ends up being actively annoying.

Then ‘In Awe Before the Rapture’ begins with a few repeated reverberating chords, ringing out, signalling the start of something…only to go on for four long minutes of not much happening. The song finally ramps up in tension with an impassioned (if overly theatrical) ‘no gods no kings’ speech, the drums picking up in pace, driving it on to an expected final flourish before it unexpectedly peters out and is followed by something of a limp finish. Those same chords from the intro return with a full band that fails to liven them up much. It seems resigned and sorrowful, which when juxtaposed with the rousing speech that came before it seems bizarre. It threatens to be an inspiring call to arms before settling into something more like a metallic lament. Are we to gather and fight or raise a drink to our inexorable end? It doesn’t seem quite sure and instead settles into a needlessly lengthy outro that is every bit as interminable as its beginning.

With such variation in styles in its three parts, The Earth is the Sky could easily be labelled as a three way split record without anyone questioning. If that were the case I’d be saying that band one are excellent, I want to hear more of band two and band three really need to go back to the drawing board. The Moth Gatherer must be given credit for their ambition and for their emotional range, but as a record The Earth is the Sky fails to quite come together. Whist there’s enough in the first two thirds to grab the attention there’s not enough to keep it and in the end a few moments that could sour your opinion of them altogether. The Moth Gatherer clearly have the tools to create something truly impressive. Sadly this isn’t it.