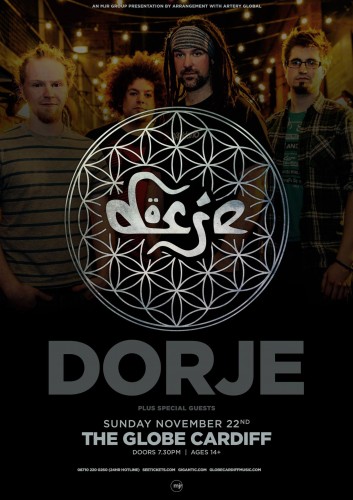 Hot on the heels on their iTunes chart bothering, self-released, EP Catalyst, Dorje roll into Cardiff bringing with them a blend of Extreme, Incubus, Soundgarden, Metallica and…. well I think that’s enough lazy comparisons for one paragraph. I arrived at the venue happily surprised to see a long queue snaking down Albany Road past its many fast food establishments and off-licences. Wandering up and down the line I caught a number of conversations that centred around the band’s YouTube presence as well as the new EP. Support came from South Wales natives, Recluse. Sadly I wasn’t able to catch their set as I was interviewing Dorje, but they sounded great, albeit it muffled. Check ‘em out here.

During my chat with the band, I made a comment about age and hanging out near the sound desk during the gig. It became quickly apparent about 40 seconds after the band hit the stage that I wasn’t staying at the back. Managing to snag a place to the right of the stage I (along with a couple of hundred others) were treated to a stellar show that covered all points between crowd singalongs and mosh pits. The vistas the band created with just 4 instruments and a voice were almost cinematic in scope…. handy then, that the venue is a converted cinema. 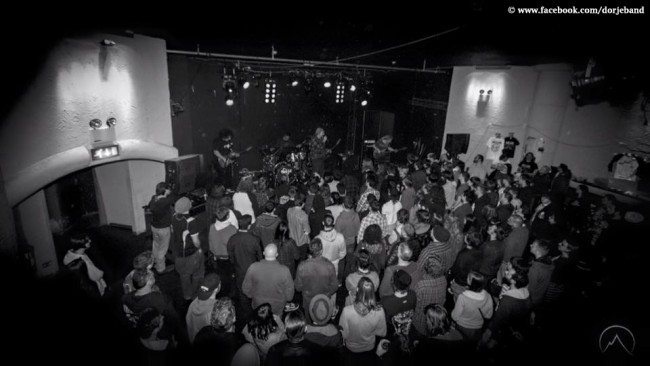 Covering the entire Catalyst EP and some earlier tunes, Dorje’s show was tight whilst allowing for moments of jamming and improve. Bassist Dave Hollingworth lunging back and forth in front of his amp, concentration etched on his face yet unable to resist the flow of music from impacting on him physically. Earlier in the night, he told me that all the bottled up aggression he feels during the day escapes on stage, and it’s completely apparent. Yet for all the physicality of his performance, he never loses the rhythm section symbiosis with drummer Ben Minal. Minal is a flurry of limbs and facial expressions that would give Lars Ulrich a run for his money. From the funk and groove of ‘White Dove’ to the kick-in-the-nuts breakdown of ‘Aeromancy’, Ben holds it all together (with Dave) and also manages to make me, at a number of points during the show, think “how the HELL did he pull that fill off?!?!” 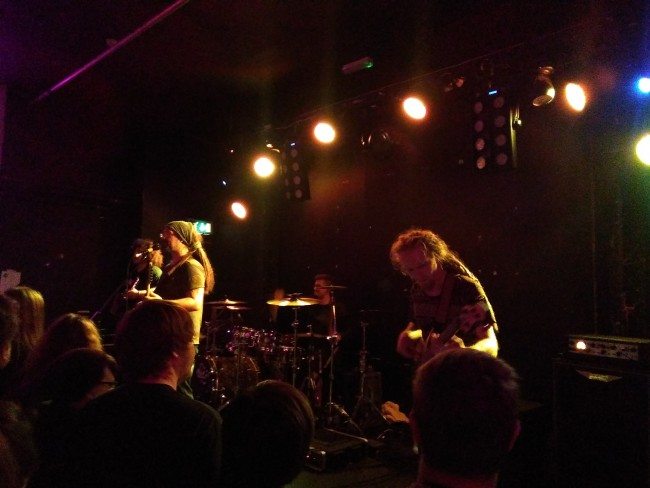 Lead guitarist Bea Massaad only stops when the music does. For the entire length of the set his head (and impressive afro) bounces, bobs, sways, thrashes about like it’s on some sort of spring. And he still manages to play exquisite guitar licks and rhythms with an ease that makes you gape in wonder whilst, at the same time, hating your own hands for being so rubbish on a guitar. Rob Chapman (vocals and guitar) can’t seem to wipe the smile from him face, even during the songs that, lyrically, deal with some darker things, he’s always quick to grin at his band mates, the audience and, I suspect, at the good fortune he has to be able to play the music he loves. His interactions with the crowd exemplify the band’s approach to its audience: there’s no “rock star” bullshit. They are genuinely appreciative of their crowd and are approachable, warm and welcoming. Rob at one point, during an instrumental passage, takes the time to high 5 and shake hands with the audience. The look on his face when the audience yell his lyrics back to him is both delighted and humbled at the same time. And the crowd were definitely on Dorje’s side that night. Constantly moving, clapping, singing, moshing.

I suspect that there is a LOT more to come from Dorje both on record and with touring. Make sure you catch them if they stop off in your city. Or even if they don’t, get to a gig. You won’t be disappointed.