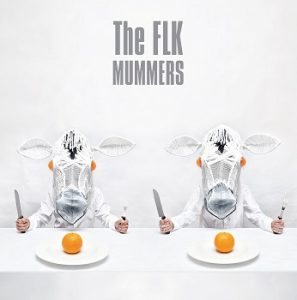 Released on September 1, 2015 via MuMusic

Much of The FLK’s mystique, that arrived intact with the celebratory chillout of ‘We Know Where the Time Goes’ and that has continued ever since, has come in the form of the Harmony Hairspray-esque “is it or isn’t it?” question surrounding their identity.  It’s certainly something they’ve courted over the years with their name, imagery, low-key publicity goings-on (such as the burning of a huge number of copies of Liege & Leaf) and song titling that prods at Drummond & Cauty’s work both past and present that points at something at least tantamount to collusion.

But does it matter?  Nobody really knows if it’s really The KLF (nah), Henry the mild-mannered janitor (could be) or two blokes that did a Shirley Collins Kickstarter a while back, and it doesn’t matter.  They’ve gained the attention of a lot of people by doing a lot of strange stuff in the name of getting their music across and it’s all been rather fun, as well as carving out their own strange identity while they’ve been at it.  Mummers represents a “coming clean” of sorts, although they still retain the best bits of their influences.

Mummers is an apt a title for The FLK as it’s probably able to be, even without taking into account the cheeky “Mu” shoehorning (Muhorning?  Oh never mind).  The cow-masked duo have been playing their parts for a few years now and they show no sign of stopping.  Continuing to take their cues from mining very old songs and giving them a modern-ish twist (mostly pausing around the late 1980s), the unnamed pair add a guitarist (the presumably similarly pseudonymous Jack Orion) and a smattering of real-named vocalists to breathe new life into old folk songs and poetry.

This being a collection of folk standards, the main theme of Mummers is death and dying and the various tale woven around these are recreated and performed with relish.  From the off, it’s clear that bringing the age-old subject matter of mortality as entertainment into the modern age is going to be a difficult listen: ‘The Butcher Boys’ leads us inwards with drones provided quite literally with the sound of unmanned military aircraft over Gaza, accompanied by a cold, computerised list of dead heroes and villains.  After such a downbeat introduction, anything and everything is fair game.

For an act built upon such opaque veils of secrecy, The FLK don’t half like explaining their tricks via extensive explanatory notes against each song title, ‘The Martyr’s Lament’ in particular enjoying a lengthy history and reveal.  This may be a way of misdirection away from their own played parts in this but it’s also a shared joy in the source material for others to find and interpret, which perhaps is the entire point of this project.  What they also do well to their credit is in the promotion of their guest vocalists’ talents at the forefront of every song, along with their own names.  Brightest of these guests is Lucy Ward, whose impassioned voice fits both the lamenting of ‘Side One’s The Plague’ (in particular the “I am sick and I must die” chorus, sung with moribund relish) and the sparse and aforementioned ‘Martyr’s Lament of Side Two’, performed with a chilling beauty.

The middle of the record is a bit of an oddness, as it gets a bit poptastic – to be fair, this is not unlike their forbears, and indeed in the same vein they subvert the hooks and catchy choruses with a list of Folklore events and Morris teams courtesy of the ‘Museum of British Folklore (Bedlam)’, re-prioritises the choral items of Scarborough Fair in ‘Troubadour’ (Thyme fans can rest easy however), and adds snippets of Irving Berlin to the sublime ‘Joy of My Heart’.

It’s a darkly fun record that shows how far The FLK have progressed with a sound and image that is of course appropriated on the one hand but utterly unique with the other, to the point where they are very much their own entity within this little universe of someone else’s creation.  In a world where “re-imagining” what’s gone on before is becoming standard practice right across the entertainment industry, it’s actually good to see this re-imagining being treated with a bit of actual imagination for a change.