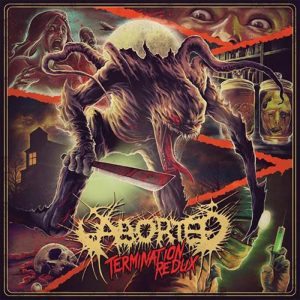 They may have had some slight hiccups at the back end of the previous decade, but since 2012’s Global Flatline the place of Belgium’s favourite gore freaks Aborted within the grind and death metal landscape is once again a pretty secure and rather enviable one. The follow-up to their all-round successful last record The Necrotic Manifesto is due later in 2016, but first of all to kick things off this calendar year we have Termination Redux, an EP serving as both a little appetiser for the upcoming full-length and an acknowledgement of Aborted’s twentieth anniversary as a band, a fact that seems a little crazy considering how cutting edge their sound still feels (career-defining masterstroke Goremageddon: The Saw and the Carnage Done has been around for thirteen of those, to make it feel extra weird).

Containing four legitimate songs and one brief intro, Termination Redux barely reaches fifteen minutes in length, but similarly to a returning Cryptopsy’s EP from late last year that’s all they really need to kick your teeth in and whet your appetite. The intro track is gleefully schlocky and pure horror cliché, but that’s been a part of Aborted’s aesthetic since day one, and the ensuing title track (accompanied by a suitably cannibalistic, boobs, butts and blood-filled video starring a striking Anne Hathaway lookalike) really is one of the best songs they’ve ever written. The choice to open things up with a grime-encrusted double-bass driven bulldozer of a slower groove instead of straight up blasts is an excellent one, the most sickening moment here, and when those blasts do turn up they’re more impactful for it. This sense of dynamics despite being fully into their aggression for the whole duration is perhaps what puts this above the aforementioned solid, but unexceptional Cryptopsy EP, knowing when to take their foot off the pedal and allow the blood to congeal and when to proceed and tear things up.

‘Vestal Disfigurement Upon the Sacred Chantry’ and the wild-eyed violence of ‘Bound In Acrimony’ fall right in line with this standard of quality. They’re down to one guitarist here having recently lost tech wizard Danny Tunker, but you wouldn’t know it, sounding as devastating as ever, and at this point stating that Ken Bedene does a killer job behind the kit is a little redundant, not off the mark for a second. “Svencho” de Caluwé has carved out his distinctive vocal style and is on good form, and guest vocals from Julien Truchan of Benighted are a nice touch if a little unessential.

The closing track meanwhile is the most obvious indicator of this being an anniversary release, revisiting ‘The Holocaust Incarnate’ (re-titled ‘The Holocaust Re-Incarnate’) from 2001’s excellent but somewhat primitive Engineering the Dead. The original will always have its place, but the song does benefit from this modern update, particularly in the second half as its hulking slam is given the pulverising weight it deserves and the solo riding atop it is given more space for its melodic character to ring out. For the most part, Termination Redux is business as usual for the Aborted of the 2010s, but it’s a more than welcome reminder than this band are simply exceptional at what they do, and that the album later this year promises to rip our heads off.