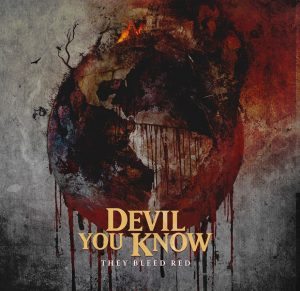 Released late last year, 2014‘s “best new metal act” and US metal “supergroup” Devil You Know, unleashed their sophomore piece of Americore, They Bleed Red. Flying under the mainstream radar the 4 piece from LA have taken all the finer elements of their former bands and, along with quintessential stateside metal, fused it into a sermon for those who take the likes of Corrosion of Conformity, Lamb of God and Pantera as gospel.

Howard Jones’ voice is part maniac part minister. Coaxing you into his parish then devastating your faith with lyrics both chaotic and charismatic at the same time. He manages to preach to the listener with an evangelical smoothness that rides so comfortably with the thrashing grooves his band throws at you.

Musically the boys are tight as all hell. With bands such as Kilswitch Engage, Bleeding Through and Fear Factory on your CV you wouldn’t expect any less. Under their new guise, the four piece aren’t reinventing the wheel, but rather steering the wheel into a newer prophetic direction that will keep you listening to the end. John Sankey’s drums are cathedral massive and thunder relentlessly under the rolling waves of Wombacher’s bass. The wailing wall of Artusato’s guitars are well constructed and solid as a rock. Much like Jones’ baritone voice, Devil You Know utilise ethereal dynamics to smash out a solid cacophony of distortion. Chunkified where necessary, thrashing where appropriate and non stop grooving as warranted.

Devil You Know have created a grilled perfectly slab of American metalcore that deserved far more attention than it received. Hopefully with increased PR and touring on the cards for 2016, Devil You Know will garner a wider international following.

In the meantime, get up to date with one of the better metal releases of 2015.