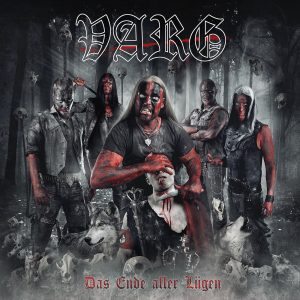 Released on January 15, 2016 via Napalm Records

Varg are a self-styled ‘wolf metal’ band from Coburg, Germany and while they wear red and black face paint that is where any similarities with folk metal heroes Turisas end, as album number five Das Ende Aller Lügen is a confident and sharp exercise in exceptional melodic death metal.

By all accounts the running theme of this album is “The political leaders of the world exposed as false prophets and seducers” and they ram this point home with the startlingly affective album opener ‘Der Große Diktator’ that features the famous Charlie Chaplin speech spoken in German and set to a mournful piano, which, if not done so already, would not be surprised to see post-rock bands take it up themselves in future…

….the epic climax of the speech leads into the thunderous one-two opening salvo of ‘Das Ende Aller Lügen’ and ‘Revolution’, which are all razor sharp death metal RIFFS, blazing guitar leads and gang chants, the former alternating between Insomnium-esque choruses and Killswitch Engage style verses to great aplomb, and the latter channelling the glory days of In Flames with an epic cleaner chorus delivery.

Although the lyrics are 99% German the anthemic writing style ensures they remain accessible to those not au fait with the language and while Varg may heavily reference other bands they are not simply derivative wannabe’s.

This is especially evident when they spread their wings on mid paced folk styling of ‘Streyfzug’ and the blistering industrial of ‘Acthung’, the latter of which deserves extra special mention and not just because of its über funky industrial riff and gang chant of a popular German word that propels proceedings (OK maybe it is), but if this is not lighting up metal clubs this year there is something seriously wrong with the world! There is even a grand symphonic crescendo thrown in for good measure.

Follow up ‘Dunkelheit’ picks up the symphonic baton and runs with it back death metal territory with a neat grinding RIFF at is central crux while Anna Murphy of Eluveitie lends her vocals to ‘Totentanz’, which is a grandiose Gothic ballad.

‘Einherjer’ and ‘Wintersturm’ both take the fast ’n’ furious death metal route in slightly different routes leaving final track ‘Ascheregen’ to be a fitting finale as it explodes into a stunningly epic power ballad.