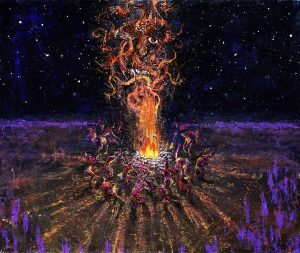 In the past days of black metal, groups of black metal bands who shared the same affinity for their particular style of black metal and also who shared a common philosophy, would get together in circles of cooperation. In these circles the like-minded individuals would pool from their collective talents and make spectacular releases.

Crepúsculo Negro (Black Twilight Circle) is in the same vein as the longstanding traditions of black metal. The Southern California collective is formed from the spectacular bands, Volahn, Arizmenda, Axeman, and Blue Humming Bird on the Left, and others who like to remain anonymous. Separately these bands are a force of their own, which have distinct, and ruthless styles of black metal. Also in the same style Crepúsculo Negro releases all their own albums and is a DIY record label collective and distro.

Desert Dances and Serpent Sermons, is the first release compilation from the Crepúsculo Negro and features tracks from Volahan, Shataan, Arizmenda, and Kallathon. First, I would like to say I have a personal bias towards all these acts. I enjoy all the music which Crepúsculo Negro has ever put out on their label. I would also say, my feelings are the same for this release.

Desert Dances and Serpent Sermons is a gateway to the album label. It has all the best in which the label offers and if you have never heard of any of the bands from Crepúsculo Negro, here is a good place to start.

The album starts off with the first track ‘Chamalcan’, by Volahn. It opens up with a clean reverbed guitar sound out of the old 60s spaghetti westerns and then ambushes into a fierce distorted blast of abrasiveness. The track continues into an almost movie soundtrack feeling, giving the listener an experience of highs and lows. Volahn has always this story soundtrack feel, the band has always let the listener almost experience and feel the mood and themes of their songs through the progressions of the instruments.

Shataan carries the theme and auditory landscape of the high desert, opening with indigenous notes and haunting guitar riffs. ‘Caminando del Desino/ Desert Smoke/ Wells Run Dry’, is haunting. The vocals are a chant into the unforgiving and arid desert air, circling and phasing into the listener’s ear like the smoke of a dying flame.

Arizmenda, one of my all-time favorite black metal bands, brings the album into an unforgiving tone. Their track is violent, intense, and filled with a howling wrath. This track really gives the broad scope of what Arizmenda is about and the tracks they are known for.

Kallathon, is the last band on the compilation and really bring the album to a great close. Their track again starts in a soundtrack like manor. Really setting a tone for what the compilation is about. Really, if they didn’t put the bands’ names on the separate tracks, I would have thought this would have been a concept album. The tracks really flow well and have a set theme of aridness, dark endless western sky, secret rituals in canyon caves, and the sounds of the nocturnal high desert.

If this compilation is what is coming from Crepúsculo Negro, then now is the time to be excited. These tracks really show what talent this label has and what solid albums they can put out. If you are a fan of black metal, then get this and prepare for the next big albums to come from this talented collective!