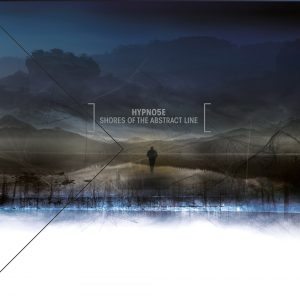 Released on February 19, 2016 via Pelagic records

Hypno5e are certainly an eclectic bunch. The four Frenchmen use post-metal as a foundation to explore the wild frontiers of their imagination and album number three Shores of the Abstract Line is no exception, self-styled as it is as a “dreamily muscular response to the deep feelings of yearning and displacement which burn within us”.

The eight tracks on offer are broken up into five compass points with each providing a variation on the theme and it is in the EAST that we commence. The titular track serving as an introduction via simple yet effective piano playing accompanying a voice sample in a foreign language and acoustic guitar leading into the staccato riffing of ‘In Our Deaf Lands’ that has a progressive/djent bent to proceedings, the front man’s own vocals come into play mixing up between soft croon and impassioned screaming…

…This second track (first proper) is twelve minutes long and stretches out into enough directions that would please most people for an entire album. Atmospheric synths and foreign voice samples, acoustic noodling and soft crooning vocals, jarring crunching RIFFS, double bass drumming and screaming in English, elegant melodic passage ebbing and flowing with rising tension (is that a saxophone?) leading to a moderate crescendo, hell even a deathcore breakdown and a finishing flourish of Flamenco.

There is no obvious hook provided for the casual listener, but it’s still engrossing and captivating in its own unique way. In fact this will be the situation throughout so keep with it.

This almost scatter gun approach is continued with the two tracks featured in our journey to the West although the emphasis is on chilled out prog based on classical guitar work, clean soft vocals and elegant melodies with regular transitions into post-metal/melo death riff workouts …

…Although why this is split into two tracks when the second of the two is really the three minute finale to the eleven minute main body that is ‘Where We Lost the Ones’ is a bit of a mystery.

The joker in the pack being that as ‘Tio’ is purely acoustic with a Latin feel to the playing accentuated by the Spanish lyrics and contains zero voice samples, impressively atmospheric and does have a very effective Acapella moment about three quarters in.

‘The Abstract Line’ brings Hypno5e back to type (as much as they have a type) with melodic post-rock and voice samples followed by twisting metallic riffage and growled vocals. An interesting passage of play occurs when the heavy riffing starts alternating with soft acoustic sections and they occasionally intermingle with each other. They even pull off the same odd mechanic from earlier in that the next track ‘Sea Made of Crosses’ is actually a continuation of the previous track even with the djent style riffing that erupts. However it does have the ‘pleasure’ of ending on a really odd narration about a man playing a piano (which reminded me of the pseudo twilight zone interludes in the Max Payne games).

The same narrator bridges us into the final track and fifteen minute epic ‘Blind Man’s Eye’, which chops and changes all over the place between progressive metal riffing, trippy synths and harmonics, soft clean vocal harmonies and further odd narration, leading into an almighty crescendo that drops out as we are left with a piano and voice sample to play us out as we came in.

In most hands the above would sound like an unholy mess so it is to their credit that they pull it off (and at just a 4 piece). There doesn’t appear to be a cohesive element holding it all together, but the quality never drops below “very good” so it keeps you engaged.