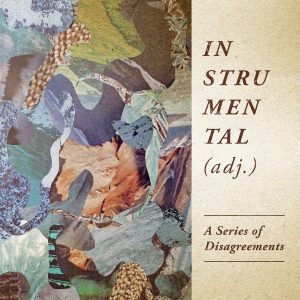 Released on November 17, 2015 via Art As Catharsis Records

That Frank Sinatra had regrets is well documented, what is less well documented is his passion for all things math rock. Doubtless he’d really love this band were he alive today and wouldn’t – like me, gentle reader – have kept dropping the record to the bottom of the review pile. This excellent EP, which came out on the awesome Art As Catharsis label in November 2015, passed me by for all kinds of reasons (I won’t tell you, ‘cause I’d have to bore you) – and like the erstwhile head-honcho of The Rat Pack, I had cause to regret not sooner listening to this recording; barely seconds into the first track in fact.

A Series of Disagreements is the first EP by this band. Don’t be put off by the rubbish name. Just don’t. Don’t, because over the course of just 16-minutes Simons Dawes and Groves and Chris Allison pack more ideas, more time-signatures, and more virtuoso ear-bending composition into quarter-of-an-hour than most bands manage in – oh, years. Math rock (not a term I have any affection for) it is, jazz-rock, avant-rock – certainly. Fripp-esque? Belew-esque? Zappa-esque? Undoubtedly.

None of the tracks are long, nothing outstays its welcome, and like the music of my beloved Cardiacs, are packed to the gunnels with ideas; changes of theme, time, and texture throughout. Yes, “it all sounds the same”, some would argue, but each track on the recording is steeped with its own character, rather like those cheeky feral children who steal your apples, or crap on your lawn, but you can’t quite bring yourself to shout at the rascals – such freedom, such disregard for rules. But – being math-rock – rules there are, meticulous planning and arrangement too and although the whole thing sounds like a happy accident, such music doesn’t just happen on its own. Everything here is carefully considered, composed, by lunatic unfathomable minds.

The title track, launching the EP, erupts into life through a series of polyrhythmic changes and incendiary, spiky, stuttering guitars. Next up is ‘Fibonasty’ – the shortest track here – although no less packed with incident and interest for that. I’ve no idea what a Fibonasty is, or indeed, if the doctor would even give you a cream for it, but it pulsates and drives like nobody’s business; a breezy track that swaps between upbeat jazzy arrangements to altogether more hard-core guitar chicanery at the drop of a beat. The EP closes with ‘The Nightmare of Adulthood’, which thumps away at your ears with considerable attack, a relentless, twisted, funky behemoth of a track. The production values are excellent, really allowing the music to shine. Repeated listening only serves to reinforce the brilliance of the arrangements and structures that this trio have created.

I can’t wait for a full-length record. I really, really can’t. I’d really love to hear this group expand their ideas and their sound into an album length odyssey. It’ll certainly be at the top of the reviewing list. Sorry guys for missing it the first time.