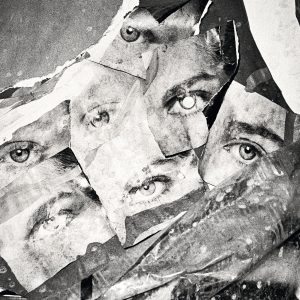 Released on January 29, 2016 via Consouling Sounds

The new strike of the Belgian label Consouling Sounds brings the name of Ovtrenoir, a French post-metal band whose name sounds pretty new in the music scene, but its members have been around for a while: guitarist and vocalist William Lacalmontie has made his name for his photography and he worked with artists/bands such as Godflesh and the Church Of Ra scene, guitarist Dehn Sora is known for his work with Treha Sektori, drummer Julien Taubregeas is best known as drummer for the hardcore group The Great Divide and, together with bassist Angeline Seguelas, they just released their début EP titled Eroded.

The album title perfectly fits the sound of the five movements of Eroded because even if it clocks in at just 30 minutes it burns so fast that you won’t be able to understand where you are. Darkness prevails all over the album and the atmosphere that Ovetrenoir creates is intense and sometimes it becomes anxious. The sound is a blend of post-metal, doom and sludge and if you give it a careful listen you’ll notice that they also manage to deliver a kind of melody arising here and there from their endless wall of frantic music and riffs. It’s a great mix that recall monsters of the genre such as Cult of Luna, even so they make their own style that’s unique and refreshing and for sure Ovtrenoir can be acclaimed as one of the most promising post-metal/sludge bands in Europe.

Each track of Eroded is emotionally packed and dynamic. The songwriting is strong and the instrumentation memorable. ‘Fires’ is a brilliant start: Ovtrenoir waste no time at all in setting the mood for the whole feel of the album as the opening song kicks off with a mighty riff and the first thing you realize is that this album is really going to blow your mind. Blistering tracks like ‘Erased Sunken’ and ‘Consume’ burn immediately with no calm intro. I particularly like the song ‘The Land Where We Can’t Break’, which might be my favourite one, where the screaming vocals, the work between the guitars and the use of delays are brilliant. Through the melody and the abrasive continuous crescendos the band shows its ability to evoke a sense of power and exuberance rather than misery, sadness, or anger – emotions that post-metal/sludge sounds are so often associated with.

Eroded ends with ‘Outrenoir’, whose atmosphere is absolutely dark, but you’ll always find melodies and progressions here and there that make this track, and in general the whole album, really interesting. ‘Outrenoir’ is a chaotic carnage: the explosion of guitar noises and the devastating drums give to the song an apocalyptic dimension.

Eroded is a very solid start with an overwhelming abundance of momentum and crescendo and, if this review made you curious, go and listen to Ovtrenoir.