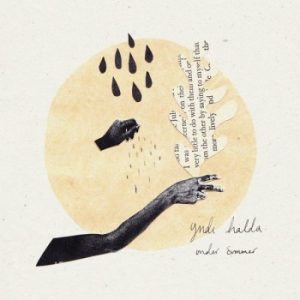 In the broad music world that goes under the umbrella of Post Rock where there’s undoubtedly creativity but also a lot of redundancy, Enjoy Eternal Bliss is a real gem and I never get tired of it. Nine years after that first release yndi halda, the Brighton based quintet, are back and about to release a new collection of songs titled Under Summer. The second effort of the band is composed by 4 movements that in approx. 6o minutes offer a multitude of sounds covering a spectrum of moods from melancholy to elation.

I’ve listened to this album several times in the last week before writing about it and it managed to keep on inspiring me. Under Summer is more than a collection of four songs: it’s an experience that will let you explore the most beautiful sonic landscapes. The strong point of Under Summer is right at the heart of the album with ‘Helena’ that in its 18 minutes can be an album in itself. Its sound falls between lush post-rock, organic ambient and ethereal cinematic soundscapes. The beginning of the song is bittersweet and it has the same effect of a cozy blanket that keeps you warm throughout a cold winter day. The serene calmness of the opening violin is sublime and the crescendo right after is glorious. At this point of the album I recognized the fact that yndi halda are really back and the wait was worth it. After 7 minutes the sound changes and the crafted cinematic soundscapes of the violin and the electronic base set up the mood and feelings to become the soundtrack to your daily life. ‘Helena’ is the proof that the band keep on pushing the envelope to experiment with new sounds and emotions.

When I first started listening to Under Summer I was a bit disappointed; being so in love with Enjoy Eternal Bliss I couldn’t feel the emotions that album still transmits to me. If you take enough time to absorb Under Summer then you’ll love it. The band maintains the same minimalistic approach but there’s room for that melody and those crescendos they so brilliantly accomplish. The opening ‘Together Those Leaves’ and ‘Golden Threads From The Sun’ are a kind of overture to the centre of the album which is its pinnacle. The vocals in ‘Together Those Leaves’ are an additional instrument that complete the work. The 14 minutes of ‘Golden Threads From The Sun’ unfold like a flower, enwrapping you with eerie sounds. It’s one of the most joyous moments.

Under Summer ends with ‘This Very Flight’ through which the quintet craft heavenly symphonies, paint a soundscape of soft meadows with exceptional grace. ‘This Very Flight’ brings feelings of warmth: it’s deep, it’s joyful, and it’s melancholic.

There’s movement in this album, there is post rock and ambient and there’s a progression in all the music that requires the listener to pay careful attention to everything that yndi halda make happen. There are all the ingredients to let Under Summer be your soundtrack. It’s a matter of the intimacy yndi halda establish with you that provides the freedom to shape their sounds according to your mood.