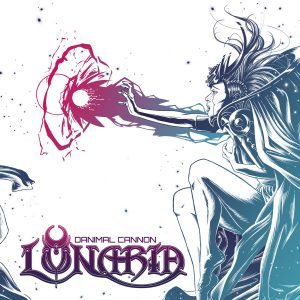 Danimal Cannon’s 3rd solo release, Lunaria, is being released March 11th of this year. It’s a staggering blend of 8-bit Chiptune and assorted genres. If you’re into metal and video games, you’ve probably heard of Danimal Cannon before. He’s been involved in many VG music projects, notably Metroid Metal. Not familiar? Fix that. Regarding Lunaria, a staffer of Echoes commented: “It’s pretty bonkers”. I’ve listened to the album about 5 times now and must agree.

So let’s talk about a few songs:

‘Axis’ opens up with a nice melody, which is torn open by an assault of metal guitars and odd time signatures. You can clearly hear the two personalities of Chip and Metal. The dichotomy between these two sounds like controlled chaos. Adding to the musical bedlam, you can hear that Danimal has included 8 bit sound effects. These are laid right on top of double-kick blasts and blinding fast Chiptune and guitar solos. It sounds like he’s throwing out everything he has and is daring you to stick around.

The title track, ‘Lunaria’, is great! It has more of a prog-metal feel, as well as guest vocals from Emily Yancey. Again, there is a lot going on, but I think because of the vocals there’s more constraint in the delivery. It’s a great selection for a second track, giving the listener a slight reprieve before moving on. After a few listens, ‘Lunaria’ sounds like it could easily be on a Metal Gear soundtrack.

‘Long Live the New Fresh’ begins with a chip melody that reminds me of Out Run on the Sega Master System. This track has more of an EDM feel to it, with a house rhythm that’s bouncy and upbeat. Wait…is that a Miku Stomp I hear in the mix? Surprise after surprise! About two minutes in, Danimal changes gears again and throws in some Dubstep. I really appreciate how many genres and characters are crammed into each of these songs. At this point, I can’t believe that 1) I am alive and 2) that he has produced such a huge array of sounds and melodies by the third track.

Something I haven’t mentioned is Danimal’s guitar chops. ‘Red Planet’ gives his proficiency in both riff and solo writing a spotlight. Throughout Lunaria, his guitar sounds great and his choices of riffs are competent and fun. You can hear in both his tone and delivery that he is an educated player, as well as having both an ear for, and a vision of, the music he is writing. I think this might be the most well-balanced song and is an excellent introduction to the 2nd half of the album.

Speaking constructively, ‘Surveillance’ offers a throwback to industrial metal of the 90’s. I hear musical influences from regarded bands of that time. While this might float the boat of some listeners, it turned me off. Also I would have preferred vocals from Emily Yancey, as the vocals sound almost too close to known vocalists of that time. I think this is probably my least favourite on the release. It has the same constraint of the title track, but doesn’t connect with me quite the same. I believe this song could have been omitted without taking away from the overall presentation – which brings me to my next constructive opinion:

I would caution listener fatigue during Lunaria. At 50+ minutes, it can be intimidating with its robustness and delivery. It is a fun and energetic experience, but may not be very flexible in regard to potential listeners or environments. With so many sounds happening in a varied group of songs, I can imagine folks not familiar with this genre tapping out quickly. Danimal does a good job of pacing, but these songs demand your attention.

Lunaria is an eclectic presentation of unique songs, and demonstrates Danimal’s proficiency in songwriting and performance. You are not likely to find a better written and executed Chiptune release. If you’re familiar with the history of this genre, you’re probably expecting something ambitious. Lunaria is ambitious, just like classic shmups of the 80’s and 90’s. And like those shmups, it can be challenging, if not daunting at times. It’s an impressive feat of musical and technical prowess. This sounds crazy, but I think this is one of my favorite releases this year.