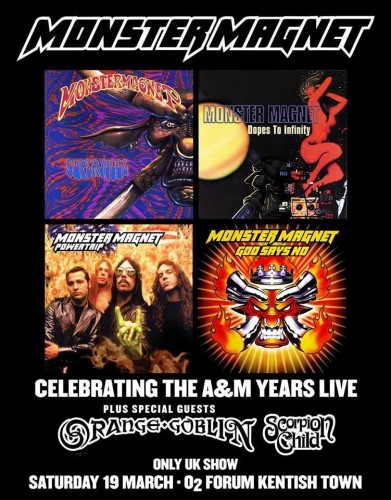 Coming from Austin, one of the great music cities of the world, Scorpion Child had me intrigued as to what they would bring to the party. Taking to The Forum stage in front of a reasonable audience for a 7:15pm start, the Texas based 5 piece – complete with the Lone Star state flag draped from the keyboard – got things off to a suitably rocking beginning. With their new album due out – Acid Roulette – in June this year, naturally tracks from it were showcased to the London crowd tonight.

They seemed a decent quality hard rock band, nothing particularly new to the ear, though it was good to hear a keyboard in there so at least they are trying to be a bit different in their approach. Part way through an earlier song in the set there was an instrumental break mid-song in which lead vocalist Aryn Black stood stock still while his band mates were going hell for leather around him. It was a bit strange, but did make sense in a way as in both singer and song went nowhere. It was a flashback to those halcyon rock and metal days of the meaningless solo, but here at least every band member was doing it at the same time! Fortunately that was the last major instrumental break of the set, and normality resumed.

Aryn has a pretty good rock voice, but for me the songs at the start of the set didn’t give him the opportunity to show what he was made of, though the second half improved. He made the effort of trying to engage the audience, getting down on his knee at the edge of the stage to sing to the first few rows, encouraging the audience to get involved. By the end I couldn’t remember how any of the songs went, but it was all in all an enjoyable 35 minute set, and I will give the new album from Scorpion Child a listen when it’s released through Nuclear Blast to hear what they sound like recorded.

Next up were Orange Goblin. The stalwarts of the London stoner scene were totally at home on the bigger stage, and were greeted very enthusiastically by the packed Forum crowd. From the start they had the crowd and delivered a supremely accomplished set. By the second song vocalist Ben Ward was already kissing the bald head of a stunned security guard in front of the stage, showing a playful mood which encompassed his impressive stage presence!

With a mixture of hard rock and stoner, and a bit of psych thrown in for good measure, they got the crowd going, kept the pit busy and looked like they were having a genuinely great time doing it! Ben was being the great frontman and engaging as much of the audience as possible, using the stage to encourage more people to the party, and done with a manner that showed he was having a fantastic time, and wanted everyone to enjoy it as much as he was!

By the time they finished with ‘Red Tide Rising’, the crowd were well and truly warmed up and were vociferous in their appreciation of a very impressive set! It had been a number of years since I last saw Orange Goblin. I’ll certainly need to make sure it’s not that long before I see them again!

I’ve been a big Monster Magnet fan since the late 90’s, and have seen them a number of times since then, so when they announced this tour was covering the ‘A&M years’, for me it was akin to a greatest hits set from 4 fantastic albums – Superjudge, Dopes To Infinity, Powertrip and God Says No, which was fine by me! It was great to see that they can still draw crowds at bigger venues, as their last London gig was at the Electric Ballroom, so a gig at The Forum was a noticeable step up in size (and a nod to Orange Goblin for helping with the numbers!).

From the moment the opening riff of ‘Crop Circles’ graced our ears, the crowd was up and loving every minute of it! Even without Ed Mundell in the band, Monster Magnet were as good as I had ever heard them. The band is tight, Dave Wyndorf is still one of the great frontmen of rock and in very good voice and they delivered an absolute powerhouse of a gig! ‘Powertrip’ came in second song, and the mantra “I’m never gonna work another day in my life” was belted around The Forum by the passionate throng inside! ‘Melt’, ‘Superjudge’, ‘Twin Earth’, ‘Look To Your Orb For The Warning’ all followed, and performed brilliantly with Dave prowling the stage, adding the third guitar to great effect when needed as the riffs kept on coming. ‘Look To Your Orb…’ is a space rock masterpiece for me and performed brilliantly tonight.

The mighty ‘Space Lord’ closed the first part of the set, with all the traditional built up and the mass participation in singing the chorus back with feeling. An absolute monster of a song given the full treatment by a band still at the top of their game. A brief hiatus as the band got their breath back, and then it was on for the encore. ‘I Want More’ and ‘Fade Down’ wouldn’t have been my personal choices, but hey ho, they sounded pretty damn good anyway. The final song was ‘Negsonic Teenage Warhead’, and the crowd went suitably wild as Mr Wyndorf sang “I will deny you”, and it may not be the intention of the song, but it is true to the longevity of the band, and to anyone who doubts if Monster Magnet are still one of the powerhouses of the rock scene. Tonight’s storming performance showed they are still the Space (rock) Lords.