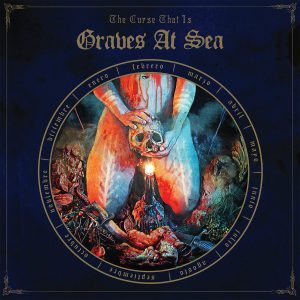 Released on April 1, 2016 via Relapse Records

The Curse That Is could not be a more apt title for the first official full-length from doom miscreants Graves At Sea. Their 2003 EP Documents of Grief saw them touted as one of doom metal’s darkest hopes, and an acclaimed split record with fellow miserablists Asunder cemented that reputation. Unfortunately line-up changes, death and myriad other setbacks resulted in their break up before they could ever fulfill that early promise.

Years passed, members moved on to other bands, fans lamented the missed potential, and their story seemed fated to be over before it truly began. That was until vocalist Nathan Misterek and guitarist Nick Phit returned in 2012 with a new rhythm section, and proceeded to prove they had lost none of their miserable groove.

A new EP This Place Is Poison and a split with Sourvein followed, demonstrating a stunning return to form, but they weren’t enough to satisfy those who were fiending for a full-length record.
While it may have been over a decade in the waiting, The Curse That Is finally provides that long-delayed fix. However, even a cursory listen reveals that this is not the album anyone would have expected from Graves At Sea.

There has been a marked shift in songwriting dynamics, which is somewhat inevitable with the passage of time and the change in band members, and besides, no-one wants to hear any band simply rehash their back catalogue for the sake of consistency. Gone, for the most part, is the languid swing of their old material, and in its place a more relentless, driven approach that may jar long-time listeners of the band.

For instance, the title track eschews the slow-n-low ethos of their previous work in favour of a barrage of riffs, which display an unexpected level of technical prowess from Phit, accompanied by drummer Bryan Sours making full use of his kit, with the final result sounding not entirely unlike High On Fire.

The centrepiece of the album, ‘The Ashes Make Her Beautiful’, cultivates a genuinely mournful atmosphere, a masterpiece in bleak yet beautiful doom. Incorporating acoustic guitar, creaking violin and sheet metal percussion alongside some of Phit’s most swaggering riffs and downright tender vocals from Misterek, it’s quite possibly the best song Graves At Sea have ever written, and a clear album highlight.

Unfortunately tracks such as ‘Dead Eyes’ and ‘Waco 177’ wear out their welcome long before they reach their end, and by the time you’re halfway through closing track ‘Minimum Slave’, you might find yourself checking where the needle sits to see how much longer you have to go.

While none of these songs are bad, as each contains some truly excellent riffs and vile vocals, they do tend to ramble on and repeat themselves far longer than they should, and the acoustic guitar and violin interludes throughout can only do so much to make up for the lack of variety in those few tracks. It’s an affliction that occurs throughout the album, with the gargantuan 76-minute running time sometimes seeming like an effort to make up for lost time by cramming a decade’s worth of ideas into one album.

Although it could’ve been edited down to an all-killer hour, The Curse That Is still contains some of Graves At Sea’s best music, and can be chalked up to simply having too much of a good thing. For a band who never quite got the attention they deserved the first time around, hopefully their curse is finally lifted and they’re rightly acknowledged as one of doom metal’s finest bands.