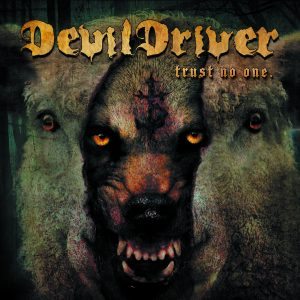 When side projects become bands in their own right, it can often be difficult to throw away the shackles of the original. When your presence is such a driving force in metal, expectations are almost always set incomprehensibly high. By peers, fans and critics alike. Cavalera Syndrome I like to call it!

The highly enigmatic character that is Dez Fafara has had to endure this plight. With his band DevilDriver’s seventh release, Trust No One, any resemblance to the original incarnation of the band plus any shadows the frontman’s mothership have cast are absolutely removed. The Californian heavyweight’s second release under Napalm Records sees them hit a new level of confidence in their songwriting. Even through countless lineup changes, Fafara seems more than comfortable in his skin, lyrically and sonically. Cue a flawless vocal performance that’s like a melodic baseball bat to the face. With the reformation of Coal Chamber, any mainstream urges the singer may have felt, have been well and truly satiated. Leaving Devildriver to unleash an album of solid Americore metal.

This is quite possibly their best release to date. Musically coherent and fluid, Trust No One commands you listen from start to finish, imprisoning your aural cavities in a tomb of insanely heavy guitars and perfectly executed rhythm. Mike Spreitzer’s chugging ESP and OD808 cranked to eleven combo have become the backbone of DevilDriver’s sonic onslaught. Fafara and Spreitzer are well and truly in synch throughout their seventh album. With more focus on their thrash and death influences than on any of their previous records and clearly uninhibited by any major label to force focus on their original, supposed “trademark” sound, it seems DevilDriver have well and truly established their own trademark sound. The groove metal moniker that follows Fafara around is nowhere to be found on Trust No One. Yet as it goes, some of the catchiest pieces of modern metal are in these ten tunes. Fists will be flying in the air and pits will be circling

As the penetrating eyes on the album cover clearly imply, the sheep’s clothing has been torn away and the wolf is here to play…