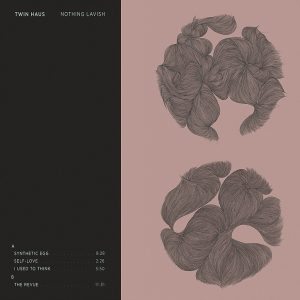 Today’s Australian music scene has become known for quite recent and insanely cool revivals of 20th century genres. I guess the way to get heard for young Aussie bands is not so simple.

I would say Brisbane quartet Twin Haus are not completely musical thieves. Instead they are good analysts of the past. Twin Haus sound is quite unpredictable; it sounds like a well-done avoiding of over-used musical tricks and cliches. Compared to their previous work Waxen Myriad, which is also quite interesting to check, the band turned from post rock solos and sound walls into more psych direction. With sophomore EP Nothing Lavish they incorporate influences from Radiohead, British 2000s indie and postrock to make a new musical cocktail.

‘Synthetic Egg’ opens the album with 30 seconds of major mood guitar chord and insensibly turns to an epigone of Radiohead’s dancy melancholy added with some jazz notes. A little appendix of ‘Self-Love’ is a nervous burst of strings. Surprisingly, bluesy and tranquilized ‘I Used To Think’ is next, being very opposite to the rest of material on the EP. It seems more pop and radio-friendly, but doesn’t lack of charm and deepth. ‘The Revue’ at the final track is a psych spectacle. Its 11 minutes attract with uneven rhythm and trippy mood. That track is like sociopath riding a bike somewhere at the shore then suddenly getting to overcrowded main street.

Nothing Lavish really has the taste. Not too sweet, not exaggerated with riffs/drums/electronics, not putting in dumb apathy. Twin Haus have gained more synergy in playing. Nothing Lavish leaves with delighted awaiting of more serious format (album) works from the band.