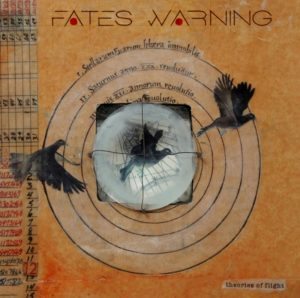 Released on July 1, 2016 via Superball Music

Fates Warning was a gateway band for me, as it probably was for many others, into the realm of progressive metal. For many people, their introduction to the band was the seminal album, 1986’s Awaken the Guardian, with then vocalist John Arch. For me, it was their follow up, and Ray Alder’s debut, No Exit. The band’s video for ‘Silent Cries’ hooked me immediately, and I had to hear more. I was even more blown away when I purchased the cassette and found that the entire second side was only one song, ‘The Ivory Gate of Dreams’. I could not comprehend a band playing a twenty plus minute song, but Fates Warning had done it masterfully. I have followed them ever since, album after album, and they have always been able to bring something new to me. Fates Warning’s latest album, Theories of Flight, released on InsideOut Music this Friday, July 1, 2016, is no exception.

The listener is eased into Theories of Flight by a soulful Jim Matheos guitar solo on ‘From the Rooftops’. The great Ray Alder’s voice soon follows, matching Matheos’ energy. Then, just when you think this is how the song is supposed to be, Fates rips open the track to be the burner it was truly meant to be. This is but the tip of the proverbial ice berg, as Theories of Flight is full of more surprises. ‘Seven Stars’ is the obvious lead single nominee, harkening back to the Inside Out album and ‘Pale Fire’. This album is not full of radio ready tracks, there are a couple ten minute epics on Theories of Flight as well. ‘The Light and Shade of Things’ is first, and like most of Fates Warning’s songs, you do not realize how long it is until it’s over. I attribute this to Matheos’ ability to create such an easy flow with this music. Theories of Flight is a testament to this, as the album’s nearly 53-minute running time goes by in a flash.

The next great single on the record is ‘White Flag’. This song also has kind of a throwback feeling, but never sounds recycled. Joey Vera’s excellent bass work is a little more evident on this track, as well as an absolutely smoking Matheos’ solo. The second epic track on the album is ‘The Ghosts of Home’. After over a minute of samples of everyday media, the sweet tones of Ray Alder give us another introduction to the prog metal majesty to follow. Bobby Jarzombek’s galloping rhythms guide you through the ups and downs of the song, making sure you end up exactly where you should be. The album closes on more media samples, and Matheos playing something that strongly reminds me of the record that made me marvel at them so long ago.

Theories of Flight is an instant classic, culminating the band’s 34 years of existence into one great record. I have read that Jim Matheos primary song writing motivation is typically an overwhelming fear of failure. It’s interesting to know that someone so talented and well respected in his community has the same self-doubts as a dork like me. Well, in this humble dork’s opinion, Mr. Matheos and Fates Warning have nothing to worry about.