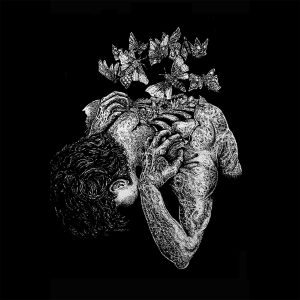 It’s been a while folks. I wish I could have been as busy reviewing as I have been in life these past few months, but alas, it seldom works that way!

Today I’m going to be telling you a little bit about the band Conjurer who have just dropped their debut record, I, on Holy Roar Records. What a record to come back to!

Conjurer are a band from the Midlands in the UK, who’s short existence has already been creating far reaching waves with ease due to their incredible live shows and incredibly well written songs. No easy feat for a band who are a mere 2 years old. To my ears, they would have sat nicely on the Metal Blade roster 10 years ago (I say that, I’ve not bought anything on Metal Blade in around 10 years, they may still fit right in) with their mid tempo paced style of death metal and nice progressive structures, with elements of doom and even black metal sprinkled in to keep it interesting. It reminds me a of Into The Moat a little bit, but without the chaotic jazz influenced parts. It reminds me of The Red Chord a little. It reminds me of Agalloch in all the right places, and it will tick boxes for Gojira and even Mastodon fans of old.

‘Conjurer’ is recorded EXTREMELY well by Steve Sears (Hang The Bastard, Gallows, Krokodil). It’s a very polished, hi-fi death metal recording. Every note from guitar and bass, every kick drum, every snare hit is totally audible and executed with perfection. From the perspective of the recording, I can see fans of the UK band Architects loving this. The one thing I will potentially say, I can see them sounding like a VERY different band live, not a bad thing mind you, no one wants to go watch people head bang on stage as they recreate their record perfectly. That’s boring. Unless you are Rush.

The EP opens up with a haunting clean section before immediately dropping you into a twisting, turning and ever changing maze of chaotic and groove laden metal that may please fans of Ion Dissonance, it’s impossible to not straight up bang your head. The blend of high and low screams is crushing in its own right and will please any death metal fan. It sets the EP up perfectly, pretty much presenting you with what this band are all about. It’s with later tracks that new styles are added and executed remarkably well. It keeps the entire record fresh, even with repeat listens because there is always something new to pay attention to, and it’s a rewarding experience because of this.

A band to watch for sure. I can see them being leaders in the UK metal scene in no time at all.