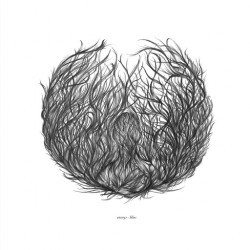 Three years after their debut album Violescent, Envoys, the post metal quartet from Leeds, are back with a new set of songs that will keep you on the move from beginning to end.

Bliss is a kind of continuous of the previous release with its dynamic and engaging blend of post-rock, metal, sludge and prog-rock, but Bliss is more abrasive, confirming that the band worked hard in this time frame and that they now have a stronger identity and a very well defined style.

Bliss is louder than Violescent (review here) , there is more noise in it but there’s also a better combination between the walls of sound and the melody that gives a break to the listeners before engaging them in a new ride of sound. They don’t waste time and the prog rock elements that are the very base of the compositions are brilliantly executed. There are also more vocals in the new album and that give more depth to the songs thanks to their passion and force.

Bliss opens up with an incredible wall of sound and explosive riffs that overwhelm you to the point that the first time I pressed play I thought I couldn’t make it.  ‘Strange Attractor’ amazes with its stunning melody and brilliant guitar interplay. This ability to destroy and just few seconds after lull the listener with a soft, soothing sound makes Envoys a notable band. At the end of the first track you get  a sense of the album’s mood with its wide variety of sounds.

The subsequent track ‘The Hostage’ is incredibly beautiful with its rising and falling synth providing a great variation in depth and the alternation of heavy atmospheres with soft notes, as happens in the best rides. I particularly like the vocals here that are the additional instrument that really make the difference.

While ‘Sabouters’ passes quite unnoticed, the title track is powerful, precise, and perfect. This song summarizes a mix of feelings from melancholy and sense of loss  to excitement in a deep and powerful atmosphere that doesn’t miss a shimmer of hope when the sound calms down and the voice of Tom take the listeners by the hand and accompany them through the journey.

‘Like a Son’ is a gentle, sublime interlude that allows you to rest before being completely overwhelmed by the powerful riffs of ‘5:1’. With ‘5:1’ the band decide to burn from the beginning with the hardcore vocals of the front man whose performance is amazing. The perfect blend of math rock and metal elements demonstrates that Envoys aren’t afraid to experiment and that they keep pushing the envelope to find new territories of sounds. ‘Apologies’ is calm, deep, passionate and delicate before announcing its intentions with some explosive drums and riffs toward the end.

‘Reflections & Exits’ has the honor to close the album: it starts off quietly enough with deep vocals and field recordings to mislead you and let you think of a soft ending but it  soon explodes in heavy riffs and a chorus that probably makes this track my favourite on the album. ‘Reflections & Exits’ takes all the sounds explored in the previous 8 tracks, it mixes them and it combines them in a hypnotic vertigo of sound that is seriously good.

The nine tracks and 46 minutes of  Bliss will immerse you in an atmosphere where relaxation, excitement and anxiety alternate themselves leaving you speechless. Play it loud and enjoy it.
Envoys will play at ArcTanGent, a festival for fans of Math-rock, Post-rock, Noise-rock, Alt-rock and everything in between next August in Bristol, UK. If you can, don’t miss them.