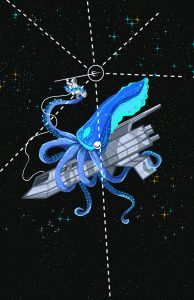 Released on November 6, 2015 via Bandcamp

Red Hands Black Feet was really quiet for the longest time. Nearly three years between their debut EP and their first full-length album, We Must Fall Forever If We Survive. It was well worth the wait.

It’s ironic that space has become one of the most explored topics in post-rock, with most albums depicting space as beautiful and expansive. This is true of space, but it’s only one facet of this cosmic jewel. Red Hands Black Feet realize this, and invite the listener to view this diamond for what it is.

Have you ever seen the movie ‘Europa Report’? I doubt you have, it’s not a very popular film. But it takes place in space, with a small team of astronauts exploring one of our planets, only to find strange lights and noises and other things I won’t go into for the sake of spoilers. But my point is that space isn’t always beautiful. It’s scary. It’s dangerous. This album could almost act as the soundtrack to Europa Report, it would fit so well.

“We Must Fall Forever If We Survive” begins with a few minutes of ambience, like the silence of the astronauts as they await the explosion beneath them to launch them into the unknown. All of a sudden, everyone is playing as hard and fast as they can without descending into atonal chaos. The rocket is away, and the music subsides for a moment. Only a few minutes into the album, and I’ve got goosebumps.

The album takes you for a ride through what space is really like. One minute you’ll be floating away on the twinkling guitars. The next minute you’ll be drifting away from safety on the doom-like riffs, as if your tether has snapped and there’s no returning to safety. The musical influences throughout have just enough variety to keep you guessing as to what’s going to happen. The next passage is never what you might think, but you know it’s going to be excellent. This musical trip is just like space, equal parts beautiful and violent.

Red Hands Black Feet has taken a huge leap forward in regards to the maturity of their sound, expertly taking influences from other genres and forming them into new facets of post-rock. It’s something I’ve never heard before, which makes this album remarkable on its own. The instrumentation is a bit lacking, but it makes for an easy translation into a live performance. The production isn’t perfect, but it’s much better than any other self-produced band I’ve ever heard.

Making a conceptual post-rock album centered around space has been increasingly popular, almost to the point where it’s getting old. But before that’s happened, someone has to nail the space theme so perfectly so we can move on to another subject. In my opinion, that time has come.