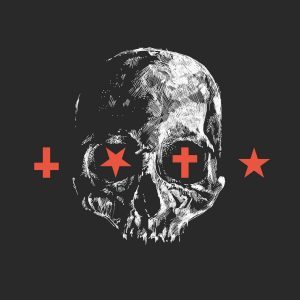 Released on September 23, 2016 via Indie Recordings

The 1970’s were an interesting time in music. Unlike the 1980’s that were dominated by pop and hair metal, while rap and alternative lurked in the shadows, the 70’s were more of a melting pot of genres. Sure disco had its heyday, but the 70’s were more than just Saturday Night Fever. With psychedelic rock declining in popularity, hard rock became much more prominent along with the emergence of glam, progressive, and heavy metal. I think this is why there are so many current bands pulling their influences from this decade. One such band is Bergen, Norway’s Sahg. Vocalist/guitarist Olav Iversen and company have been putting out their own blend of 70’s psychedelic hard rock since 2004, releasing four albums in that time. Their fifth, Memento Mori (Latin for remember that you must die), will be released September 23, 2016 on Indie Recordings.

Momento Mori is a little different beast for Sahg compared to their previous efforts. Last year’s departures of drummer Thomas Lønnheim and founding guitarist Thomas Tofthagen probably have something to do with it. New guitarist Ole Walaunet and drummer Mads Lilletvedt both come a heavier end of the metal genre, and I think their input is felt on this album. Sahg have not delved into High On Fire territory, but they do land somewhere between Bigelf and Mastodon.

Opening track ‘Black Unicorn’ fits that mold perfectly, with its swirling guitar riffs and heavy bass line. ‘Devilspeed’ does push more in that other direction with its chugging up tempo blast, but never gets out of control. From there Sahg add weight to the album’s underlying theme of how death is just a heartbeat away with the macabre guitar tones of ‘Take it to the Grave’ and ‘Sanctimony’. While ‘Silence the Machines’, ‘(Praise the) Electric Sun’, and ‘Travelers of Space and Light’ are all pure psychedelic science fiction. First you take off, then you drift through the great unknown, only to finally feel the burn of re-entry. Sahg wrap things up with the norse/pagan inspired closing track, ‘Blood of Oceans’, their first to ever to feature Norwegian lyrics.

Momento Mori finds Sahg heavier, proggier, and putting out their best album to date. I always thought Sahg was Ghost (B.C.?) before Ghost was cool, Momento Mori proves it. This album may take a bit to get into, but it is totally worth it. So sit back, relax, put on the headphones, and let wave after wave of groovy melancholy wash over you.