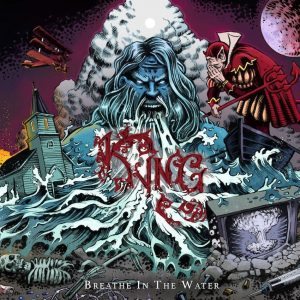 So, you say you like rock n’ roll, do ya? How about ’70s rock like Black Sabbath, Deep Purple, or Grand Funk Railroad? Well, have I got something for you! So-Cal rock trio Kyng has been delivering the goods since 2008, and eight years later, they aren’t showing any signs of slowing down. Eddie Veliz (vocals, guitar), Tony Castaneda (bass, backup vocals), and Pepe Clarke (drums) originally started Kyng as a side gig, but it eventually grew to be something special they could not contain. Kyng released their new studio album, Breathe in the Water via Razor & Tie October 7, 2016.

Because of Kyng’s flair for the groove, I feel they unfairly are put in the stoner rock/metal category. Castaneda’s bass is not nearly distorted enough to be fuzz/desert rock either, but they will get lumped in with those bands as well. If you have not heard them, imagine if Y&T were influenced by Black Sabbath, and fronted by Miles Kennedy. I want to stress influenced, not worship. While many bands try to replicate anything from Sabbath’s first four albums, Kyng instead use them as a palette. Veliz’s guitar tone throughout the album is very reminiscent of Iommi’s, especially on tracks like ‘Follow Blindly’, ‘The Dead’, and ‘What I’m Made Of/Reckoning Part 2’. Even ‘The Beginning of What Was’ has some ‘Laguna Sunrise’ flavor to it. However, Veliz and Kyng never go overboard, zigging where Sabbath would have zagged.

For instance, instead of getting a little jazzy at the break on ‘Hide from You’, they instead kick it back into rock gear. Otherwise, they just flat out go High on Fire with it like on opening track ‘Pristine Warning’ and ‘The Battle of the Saint/Lines’. This all sounds great, but for me the stand out tracks are the ones that are uniquely Kyng; alt rock/throwback ‘Closer to the End’, sweet, bluesy ballad ‘Show Me Your Love’, and the extra groovy ‘Bipolar Schemes’. None would be possible without Veliz’s amazing vocals, as they go from subtle smoothness to soaring heights, sometimes all in the same line.

For Kyng, Breathe in the Water is another upgrade in an already solid resume of work. The Machine (Lamb of God, Clutch, Miss May I) produced tracks are loaded with impassioned vocals and blues-soaked riffs, all over a vise-grip tight rhythm section. Kyng resurrect pieces of the greats of old, all while doing it with their own sound, their own way. So, you say you like rock n’ roll, do ya? Well, Kyng has got somethin’ for ya!