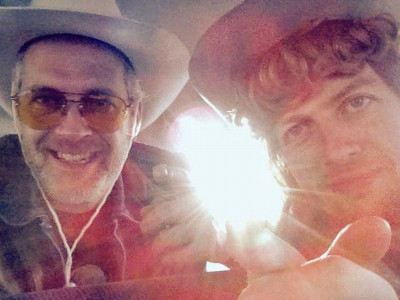 We  used to have a writer called Rich but these days he’s far too preoccupied putting on shit gigs as part of the Cosmic Carnage team. However, we’ve let him back this December to talk utter bollocks with complete weirdos across the scene.  There will be one every day from now until December 24th, like an advent calendar, but instead of half a mouthful of chocolate, you get a brutal kick to the chops. Ladies and gentleman, we’re delighted to bring you the Cosmic Round Ups 2016.

First up we have PJ from Bad Guys, one of Cosmic Carnage’s favourite bands. They’ve come along way since the first time we ever saw them, which was the  2pm slot at an all dayer at the Windmill, it would be at least  the 7pm slot now. In all seriousness, Bad Guys are one of the best fucking bands on the planet,  so I wanted to check in and see what the fuck is happening.

(((o))): You just played a huge tour across Canada, how the hell was that?

As you can imagine, foooooking amazin. Apart from Dave (who is one of their kind) none of us had been to Canada before and the Band Black Mastiff who organised the whole thing and asked us to join them looked after us so well, great band, funny guys, we owe them a lot!

There was also none stop rock and metal on the radio, rocky mountains, large Dodge Ram trucks, friendly peoples, large portions, porcupine roadkill, water slides in hotel lobby’s, shotguns, medicinal weed dispensaries, the town Rambo got thrown out of and killed all the cops, the best sushi, the best time.

They did fortunately, Canadians love heavy rock and appreciate bands that put on a show with silly double neck guitars, and they actually buy merch! In fact they say things like “take my money” which I’ve never heard in the UK.

The nicest thing one guy said after a gig in Saskatoon (where we played to Dave’s parents) was “WooOO! i just saw a 40 dollar show for 10 bucks man!” I think it was our show he saw, I hope so, he did have what looked like sick on himself.

(((o))): You are playing new songs, is there a chance of a new Bad Guys album next year?

Yes, sorry we’ve been dragging our heels through 2016, we just didn’t want to put out any old shit.

Ekranoplans – 500 tonnes of over engineered Soviet ground effect sea plane that scared the Americans for a while.

Being a dickhead for love – Stuart’s a romantic really behind that grouchy facade.

Boiled heads – I actually have no idea what that’s about. Stuart knows.

I liked a Halloween gig in Kamloops, Canada which got cancelled and moved to the basement of the support band Hemptress, the venue had changed hands and the new owner had a karaoke night on instead. the twat. Turned out to be a blast and way better than we could have expected.

Not a gig but, The Chessboxing Heavy weight final, York Hall. Bethnal Green

Dan Chandler of Sex Swing and Dethscalator fame mentally and psychically beat a man 3 feet taller than him called “the Finnish Hammer” in one of the most exciting live events of my adult life.

Has to be SUPERNORMAL this year, best so far. i only saw two bands I didn’t much like, the quality was high and the mix of noise to art was perfect, Gum Takes Tooth killed it, the weather was scorching and there was no point in the entire weekend were I felt undrugged or sober.

(I did listen to Casual nun and Melting Hands records though and liked them very much).

There isn’t going to be a next year, bloody optimist.