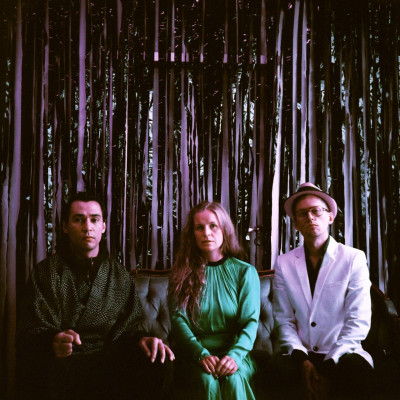 We  met Guro when she was in Arabrot and we put the them on in the Windmill back in 2014. MoE snuck onto the bill last minute as all the members were in Arabrot at the time and they were absolutely fucking amazing. This year saw the release of Examination Of The Eye Of A Horse which is also fucking amazing! With all this in mind, we thought it would be great to check in with Guro to find out the method behind these Norwegians’ madness.

I still believe in human kind.

MoE started after discovering DNA, Glenn Branca and Suicide in 2008. We´re all originally improvisors and the band also started out of a need to transform the immediate energy from improvised music and all these equal levels of sound form noise music into something more clear shaped.

Heart, time and resources makes it only possible to have one band. It was nice to join them for two tours. Future is open, collaboration might happen again!

(((o))): Examination Of The Eye Of A Horse is one of the most unique albums I’ve heard this year. Is there a concept behind it?

Examination of the eye of a Horse searches around what surrounds all of humanity these days, wart and being seduced by war. The title wants you to go through the surface, search to the core of the matter. People don´t want the truth, to believe a lie is more pleasant. Lyric wise I have wanted to put a mirror to society, to transform the reality back to the listener through music, that has the power to reach you in another way than the newspapers. Sometimes I don´t know what the lyrics are about also. The meaning changes as we travel and tour, present the music to all these different people and cultures.

(((o))): Tell us more about the scene in Norway, we imagine black metal people living in isolation and eating worms. Is it actually like that?

I saw Mayhem just before I left for the US. I felt quite strange being the only one wearing clothes that were not just black. Some disciples there are but I have no connection to Black Metal, it´s like hearing static museum versions of something that was something many years ago. I loved to hear Mayhem though. Their music is alive and relevant. They are on to something new and the music had the ability to reach through with what they were and bringing the whole crowd further into their new sound.

We played at the squat in Oslo called Blitz, a really important place for us, opening for Jusifer. We played our whole new album. Strange that being the best gig since audience abroad usually feeds my motivation stronger than playing gigs at home.

I think it was Young Mothers, the band of Ingebrigt Haaker Flaten. Man what a great band!

We still are self organized, booking our selves, releasing our own music, so with no promoters it makes it easier to avoid bigger festivals. They confuse me anyhow, why they are there.

We played at Motvind-festival in Oslo, a festival to show resistance towards other norwegian festivals being sponsored by oil companies and weapon industry. It created an awerness to the problem and changed how media addressed this issue. Really proud to have been a part of that.

Next year will be recording of new songs and tours in europe first half, including a big collaboration with a percussion trio called Pinquins. We will make a composition for the Norwegian author Called Jens Bjoerneboes book called Moment of Freedom. Also out label will make a compilation with all bands we have met on tour.

Second half we will tour for real again