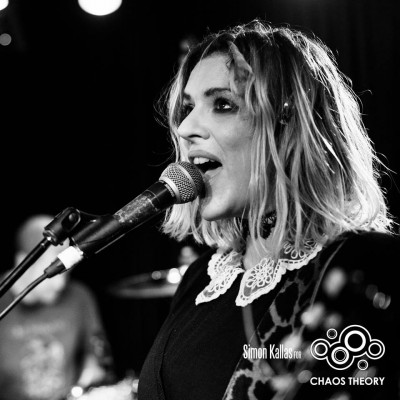 We  met Taz two years ago when Undersmile played one of our gigs with Slomatics at the Windmill. We were shocked to see Undersmile broke up this year but this was cushioned by just how awesome Taz and Olly’s new band Drore are, FUCKING HEAVY! Here’s what she had to say for herself on all things 2016.

I’m…. okay, thanks. I’ve been trapped in the house with my ill three year old son for days now and I’m staring to get a spot of the cabin fevers. How are you?

(((o))): We were all shocked to see Undersmile broke up. What the hell happened to Undersmile? Is there any chance you’ll reform one day?

We just realised that none of us would have the time for the next couple of years to do the band the justice she deserved ? We are all very good friends though and we’re always plotting away, so I’m sure we will be playing together again in the future.

(((o))): I thought Drore would be like a weird droney side project but it’s like an angry Motorhead. Have you always wanted to play this style of music?

Motorhead?!! ? Well, we are quite drunk a lot of the time, so I can see what you mean actually! We were described this year as “King Buzzo kicking the shit out of Pissed Jeans” and those are definitely two of my biggest influences so that was a great compliment and definitely what we were going for with Drore. Kind of filthy, drunken fun. But gone a bit wrong…. I love making beautiful music too, but it is strangely satisfying to make such obnoxious noise.

We are working on TapeTwo (inbetween Tom’s touring duties as bass player in Crippled Black Phoenix). We are trying to rip off The Jesus Lizard a lot on it… We’ll be recording it soon after Christmas, I think.

Basic Dicks is fun. I just do vocals, no guitar, so I can jump around and pretend I’m in Bikini Kill/Flipper/Pissed jeans etc. We have been described as ‘rudimentary pogo hardcore’ and obviously the name is a bit of a nod to Rudimentary Peni so you get the idea. Have a listen, if you will!? We’re on Bandcamp.

A toss up between the Shallow Leisure gig Drore played with Snob, Molasses and Savage Realm and the Smash Disco night we played with No Form, Fickle Twin and Grub. Those are stand-outs but there have been loads of great ones, especially all the Smash Disco shows we’ve played. They’re an Oxford-based DIY collective who put on all the best underground punk bands.

Garden Centre at The Library in Oxford (another Smash Disco night!) totally blew me away.

I’m not sure about best, but definitely the strangest festival I played this year was Common People Festival with Undersmile where we shared a bill with The Chuckle Brothers, Mr Motivator and Duran Duran! We played in this little tent and the bright sunlight coming through the coloured walls of the tent made the atmosphere really eerie and surreal. We felt like we were trapped in a David Lynch film. I’m sure the poor unsuspecting audience did too.

We are going to be recording TapeTwo and playing some shows with Drore. The same with Basic Dicks, another tape is almost ready to be recorded…. and I will still be trying to write the perfect Breeders-esque pop rock classique with my other band Lump. Fanx for asking!