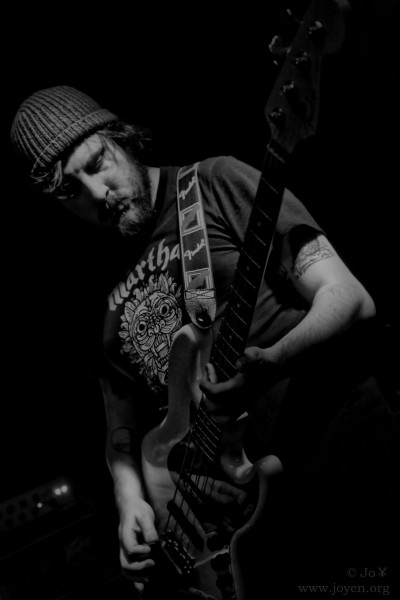 Lower Slaughter came and played our SMASH IT OUT all dayer at the Windmill back in August. They were so awesome I picked up Barney the bassist and threw him, we liked them so much we invited them back for headline show at the Unicorn in November which was also fucking awesome. Here’s Barney’s thoughts.

Hey Rich! I currently have this winter bug that’s evidently doing the rounds, but other than that I’m good thanks! Looking forward to watching Masterchef later, might even eat some ice cream… Life’s good!

(((o))): You switched vocalist this year, what kind of impact did this have on the band?

It was actually last year that the switch occurred (time sure does fly), but we did nonetheless play our first shows with Sinead the very beginning of this year. Her joining definitely injected a new sense of urgency and a different level of creativity and direction within the band, all on a positive level. Being who she is as a vocalist and given her history of singing in other bands, there was no unnecessary teething issues or anything like that, it was very much a quick and natural transition. We couldn’t be happier with the way things worked out really!

(((o))): Lower Slaughter lyrics seem quite dark, where do they come from?

Well I’m not really in a position to comment entirely on that front, as Sinead writes all the lyrics, sometimes personal, sometimes not, and I wouldn’t want to suggest where they may or may not come from. If anyone gets anything ‘dark’ from it, so be it, but I wouldn’t say that’s always the case. But personally speaking I like it that way. It would be disingenuous somewhat if our lyrics were all just ‘isn’t the world great and everything’s ok and there’s no problem’, because that’s not always the case is it? I think this year alone has been a reminder of that…

We get this quite a bit and it always makes us laugh. No, we’re not fucking angry, fuck off!!

(((o))): You just recorded your album with Wayne at Bear Bites Horse, how was that? It’s also coming out on Box Records, how did that come about?

Yeah it was great, we were pretty amazed with how much we got done in such a short space of time (just over 2 days)! And Wayne was really great in finding the right sound for us and also pushing us to get the best results. Top bloke, talented dude!

As for Box Records, we met Matt [who runs the label] earlier this year, and I developed a particular friendship with him based on a mutual love of wrestling! So we stayed in touch a lot from there, and before we knew it what was initially a subtle hint from him regarding being involved with Box went to things actually happening! We’re hyped about it all for sure!

(((o))): Who would win in a wrestling match between you and Matt Baty?

Well it’d be quite a bout, with at least one of us going through a table I expect! I imagine Matt would be the heel/bad guy in this scenario, and he’d probably sneak a chair shot in whilst the ref is distracted to get the pinfall and secure the win! I’d still hold my head up with pride and dignity though after the match, refusing to allow the medics to take me away on a stretcher. And that’s the bottom line…

For me (and I’m not just saying this) the Cosmic Carnage all dayer in Brixton was a personal highlight, as I got to live out a true teenage dream of crowdsurfing whilst playing bass!

Playing at Raw Power was also a true honour. Definitely one that we’d wanted to do from day one.

I think the first couple of shows we did with Sinead at the beginning of the year are up there too, as we were just so excited to play all these new songs with her, and the reactions we got after were really great, so that was an exciting period of the year for sure!

Getting the chance to play some shows in Ireland was a great way to close our first year with Sinead in the band too!

I think we’ve been pretty lucky in that virtually every show has been great in some way, but those are the ones that stand out to me off the top my head.

Stars Of The Lid at St Mary’s Church in Brighton was mesmerising to say the least. John Carpenter performing his soundtrack works was a real treat! Both times I saw Pigsx7 this year was fantastic! Anxiety were amazing when I saw ’em, as were The Lowest Form! Downtown Boys are probably one of the best live bands going right now. Slum Of Legs played their first show in nearly a year recently, and their new stuff is so so good!!

Progress Wrestling shows at the Electric Ballroom feel like punk gigs really, so any of their shows I attended this year are also up there for me!

Gotta be Supernormal really. I’ve been to every one (bar the very first one) and this year they really nailed it. A truly solid line up that ticked all the boxes. I even got a Supernormal tattoo this year, how bloody mad is that?!?!

My favourite album this year is definitely a record called ‘Entitled’ by Brooklyn rapper Torae. It’s really great early Nas/Dilla type stuff, and is a really underrated record in terms of current hip hop. For me, lyrically and musically it’s kinda this decade’s answer to ‘Illmatic’!

Loved the new Martha album, cause I simply adore that band!

The new Nick Cave LP was just astonishing, the Sweet Williams album was a corker, as was the new Wharves record! The Anxiety album was rad! Loved the new EPs from Burial and Floating Points. Sheer Mag had a cool EP out this year, as did Tough Tits.

Personally, I’m going to Wrestlemania next year so that’s gonna be a dream come true!! Perhaps it’s clear by this point that I like watching wrestling…?

Band wise, of course we’ll have our album out at some point and we’ll play more shows to coincide with that! I’m hoping we can head over Europe way and maybe further (?) next year, we shall see… But yeah, more of the same, but with an album thrown in the mix! Playing new places and making new friends, that’s the plan…!