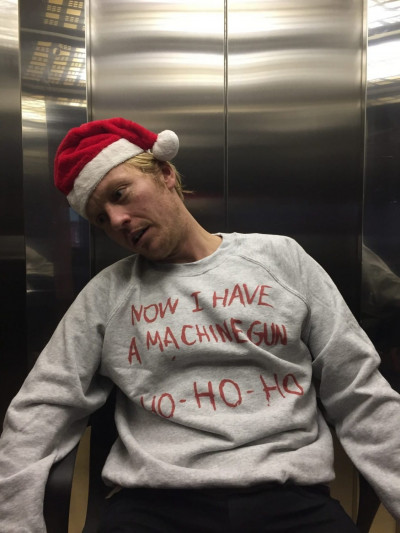 We Wild Blood played the first Cosmic Carnage of the year at the Unicorn back in January. Guitarist/vocalist Andy went fucking crazy throughout and even jumped off the pool table during Death Pedals. I really like Andy, here’s his ramblins’…

Longer than you’d think. Been tinkering together for 5 years or so I think. Guess the tale starts in Nottingham where I used to put on gigs with my friend Will (I’m Not From London). We put on Dan’s band – Apes Fight Back – a drum / bass two piece noise machine that blew our faces off. Will paid them 2 pills and a frozen shepherds pie. When Dan moved to London I used to bug him to come make some noise in my basement. He finally gave in when I promised him another Shepherd’s pie.

Thanks Rich, glad you think so. Yea we couldn’t be happier with it. We loved working with Wayne – Bear Bites Horse. He asked us in the beginning what we wanted from the recording – we both just said, make it loud damn it. And he did. Can’t wait to get back into his cave.

(((o))): You recruited a bass player this year. How did you find him and what do you think he’s brought to the band?

We’ve always been happy with the looseness and freedom of being in a two piece and to be honest I was a little worried we’d loose that with another spoke in the wheel but when Ben suggested banging the bass we thought why the hell not. Probably worth mentioning he’s never played the bass before but he’s always wanted to. He had the rock stance down way before he even owned a bass. What has he brought to the band? Low end from an old friend.

I have no idea what you’re talking about.

Probably our EP launch at Flashback in July. A tiny hot sweaty basement with a real low ceiling. It was a few days after the EU referendum and there was a general feeling of hopelessness and despair and I remember thinking whats the fucking point, how can we have a good time now? But it was so life affirming to get a load of friends together and make a racket. The show peaked with a double rainbow. Now i’m not superstitious but A DOUBLE RAINBOW?!!

Pigsx7 at the Victoria in Feb was pretty righteous. Those guys blow my mind every time.

Lightning Bolt at Visions fest was full on. I lost my shoes.

Your summer all dayer at the Windmill was nice and dangerous. Loved Lower Slaughter and Terminal Cheesecake from what I can remember.

Gotta be Raw Power. Almost passed out during Part Chimp.

Mhah Mos released a tape Loot / Gov which I’ve been really enjoying and I’ve just been given a Bloody Head tape. Has an ominous pill in the box. Shall I take it? Love to see folk putting out tapes.

The Stone Bridge EP by Mark Van Vasey is a stone cold classic.

Enjoying Andy Stott’s Too Many Voices.

Swans new album has been in my ears a lot but it’s not my favourite of their latest offerings.

Everything on Hominid Sounds.

Recording in February with Wayne again. We got a load of new stuff to get down. Dan hates recording which only serves to make me enjoy it more.