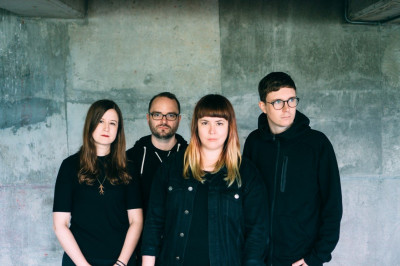 Ex-People took us by surprise when we caught them at the Unicorn last January. A unique blend of heaviness and catchiness, we were delighted when they opened our Smash it Out all dayer this year so we thought we’d check in with drummer Vicki to find out who the fuck they are.

(((o))): You guys have seemingly come from nowhere, tell us where you’ve come from?

We’ve been playing together for a little a while – just over 2 years now I think? But it was a while until we started gigging – the show you saw us play at the Unicorn earlier this year was one of our first.

We’ve played in quite a few other bands before Ex People – me and Laura first met years ago when we were playing in a Riot Grrrl band called Sad Shields, and me and Ed also played in a band called Left Leg a while back.

(((o))): Your singer said this song is about ‘David Duchovny’ from The X-Files before every song the first time I saw you live. Is this true or bare faced lies?

Haha! Sadly barefaced lies! But some of our songs are inspired by X-Files/sci-fi and dystopian themes, so you could say they’re loosely inspired by Mulder at least… probably a stretch to say our songs are anyway related to Californication era Duchovny however!

Yep, we’re writing the album at the moment and we’ll be recording it early next year with Wayne Adams at Bear Bites Horse Studios. Hopefully it will be released in the spring.

We’d definitely like to – it’s likely we’ll tour to promote the album when it’s released. But no concrete plans yet.

Cosmic Carnage all-dayer at the Windmill of course! It was a great line-up – particularly enjoyed Bruxa Maria and Lower Slaughter. Playing Chaos Theory at the Black Heart in October was also a fun show – one of my favourite venues.

Monolord at KOKO during Desertfest were pretty great. And I also saw Beyonce which was ridiculous (in a good way)! Me and Laura love Beyonce, at our next show Laura will probably say that every one of songs is about Beyonce (which again will be a barefaced lie).

Loud Women Fest was really fun – I think it was their first ever this year and I know they’re already planning for 2017. They have a great DIY ethos and support women musicians across a range of different genres.

Vodun headlined at this year’s festival and they were fantastic – they set their drum kit on fire and everything! Petrol Girls were also amazing – love their new album.

My favourite was probably the new Big Business record, and I’ve also been listening to the new Mammoth Weed Wizard Bastard and White Lung albums a lot. Sub Pop also re-released a load of Tad records recently which are great, especially 8-Way Santa. I have a real soft spot for early 90s sludge and grunge like Tad, the Melvins, Mudhoney etc.

Releasing the album and hopefully touring, and making another music video. My other band, Ghum, will also be releasing an EP early next year, so I’ll be keeping busy!