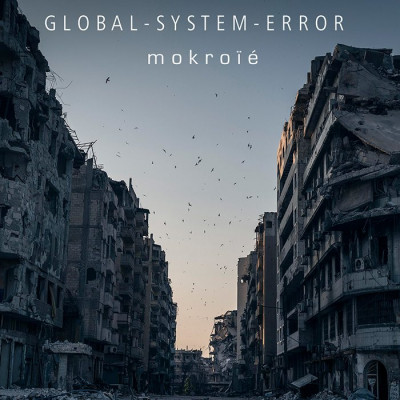 Mokroïé’s ‘GLOBAL – SYSTEM – ERROR’ is an EP of two glitch-hop tracks explored as both electronic and acoustic songs. It’s highly endearing, yet, slightly corny. I guess, this is what normal people call corny… I dunno.

‘Because’ is the first track in the collection and it kind of reminds me of Forrest Swords if he did trip-hop. “Mommy says it’s because the presidents want to protect us from the bad people” is the opening line on the album and its unique delivery, gives it this weird Anime feel. The electronic elements add texture and atmosphere and the rhythms build intrigue but really its the unique voice that hooks you in, the ending of this track weirdly reminded me of Marilyn Manson, in terms of accent and dialect, I have no idea the fuck this dude sounds like possibly Saul Williams.

‘Because [Acoustic]’ is not just an acoustic version of the previous track, there’s alternate lyrics and arrangement. Indeed, the electronic elements are stripped but, it feels like more of a raw, studio take on the album track. I like how this version brings out the feeling of another character saying the monologue; it’s strange, it’s almost as though we’ve switched from a bushido rap tale voiced by MF DOOM or some other rapper typically inclined in that direction to Saul Williams. The delicacy of the later part of the track, also adds an intriguing fragility, that isn’t present in the former version.

Again, I like the feeling of a new character in ’So They Walked’, like we have the kind of Rick Grimes, sheriff figure here, delivering a gritty opening monologue to some bleak industrial dystopia. There’s definitely a Saul Williams/Nine Inch Nails twinge to the electronics, its sound-bed is definitely reminiscent of albums like Pretty Hate Machine and Year Zero, though, I do acknowledge that it’s unfair to compare Mokroïè to Nine Inch Nails as there’s barely a handful of artists on that level. Nonetheless, Global – System – Error is promising.

Interestingly, ’So They Walked [Acoustic]’ seems to become more powerful and assured to me as an acoustic track. It’s weird though because the vocals progressively break down over the track becoming increasingly high-pitched and pained like slowly descending into tears.

Global – System – Error is a unique trip-hop, glitch-hop collection with an idiosyncratic voice and an interesting approach to arrangement.