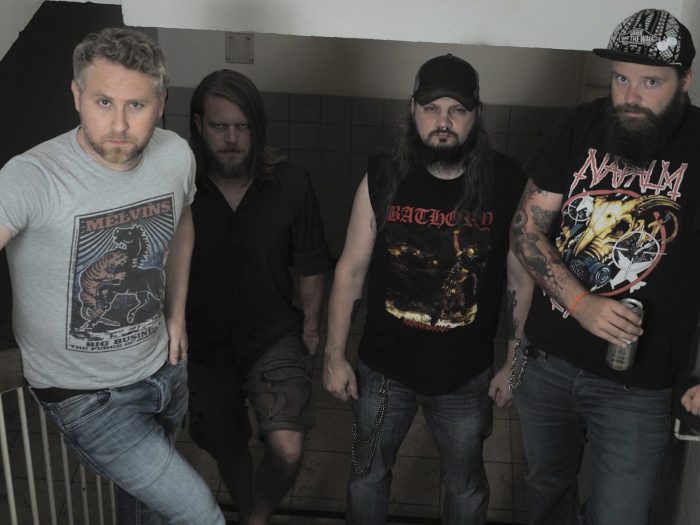 Germany’s doom/sludge outfit Obelyskkh presents their fourth LP, The Providence, through Exile On Mainstream Records. The Providence was released on all digital platforms, CD, and 2xLP with three sides of music and a Side D etching on April 21st in Europe, and will be released on June 2nd through new AISA/Red/Sony stateside distribution in the US. European vinyl orders can be placed here and US preorders here.

Following the 2013 release of the band’s groundbreaking third album, Hymn To Pan, which struck less than one year after its predecessor, White Lightnin’, the Franconian doomsters found themselves in a state of turmoil and a line-up change with bass player Dirty Dave being replaced by Seb Duster. These ups and downs, alongside the massive honesty and emotion in the band’s routines, developed monstrous pressure, which is channeled into this album, The Providence surging with massive weight, groove, and darkness. The album sees Obelyskkh leaving huge parts of their former approach behind. Less psychedelic, with more groove — not stoner rock, but more on the side of doom than grueling sludge – yet still delivered in a crushing maelstrom.

The title of the new Obelyskkh excursion might remind one of H.P. Lovecraft’s iconic poem, and you’d not be wrong, as these classic words provided inspiration for lyrical content and the artwork for The Providence. But that’s only one dimension. The other is illustrated almost perfectly by French revolutionist Victor Hugo: “Above all, you can believe in Providence in either of two ways, either as thirst believes in the orange, or as the ass believes in the whip.” The band lived by this message, beating the record out of themselves, fighting an uphill battle.

Listen to the full stream of The Providence here: