(((O))) Review: Manchester Orchestra – A Black Mile To The Surface 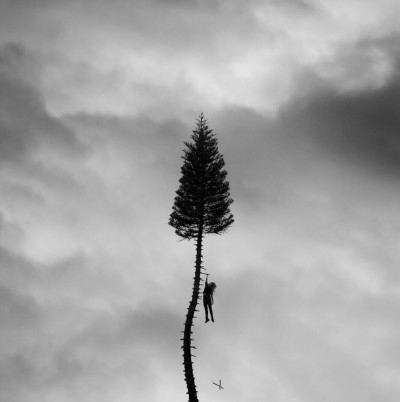 A Black Mile To The Surface by Manchester Orchestra

The fifth album A Black Mile To The Surface from Atlanta, Georgia-based Manchester Orchestra is worth every claw handed drag through the dirt and earth of melancholic tenebrosity, as we embark on a cinematic odyssey of greed, gold, birth and redemption. Every song except one, ‘Lead, SD’ begins with “The” setting the album up in a Tarantino screenplay chapter form, while we crusade through songs in which singer-songwriter Andy Hull, like a great auteur, expands on previous subjects and ways of storytelling, allowing you to traverse through his mind of dark mournful majesty while his voice acts as a linchpin of liaising lullabies.

I have this ongoing problem with Manchester Orchestra that I’ve had since their first album, and that’s every album they release is better than their last. It’s as if they have cast some ancient forbidden voodoo curse on me that I can’t seem to shake, and A Black Mile To The Surface is no different. Hull’s voice is used to pitch perfect effect and has become a significant and unique instrument throughout their catalogue, with his hushed whispers here being no exception.

“Why do I deserve the science to feel better about you?”

‘The Silence’ is a perfect example, filled with quiet movements that dwell like a calming sea as they shun and paralyse us amidst the consuming fog while eclipsing us in “intensity without volume”. The latter being Hull’s mantra for the album, their previous album COPE was more intense with volume, it being their loudest album to date.

A Black Mile To The Surface is their biggest album yet, and like each album they create it sounds so different but still unmistakably a Manchester Orchestra record. The band have garnered the assistance of three different producers for the new record including heavyweight John Congleton, Jonathan Wilson and leading the bande à part is Catherine Marks. Between them they have worked with The Killers, PJ Harvey, Explosions in the Sky, This Will Destroy You and Father John Misty. You can feel the multifarious production heavy troves in each song, from the southern gothica of ‘The Alien’ to the post-rock cinematic trident of ‘The Moth’ and ‘The Grocery’.

Hull’s tones are your sorrowful consciousness as he narrates the story stitched into the chinks of the albums core, like that of the protagonists down the mines, literally and metaphorically.

“My entire life you’ve been obsessing with the light
The closer that you get, the further up you’ve got to climb”

I can’t help but visualise Daniel Plainview from the opening scenes of There Will be Blood at times, only adding to the filmic lens the album is capsulated in. Like all great stories, the album delves through a mixture of themes and scenarios, opening with ‘The Maze’ which is a fitting ode to Hull’s newborn daughter Mayzie. You may have expected happier moments on the album, not just here and on ‘The Sunshine’, however that’s not always the Manchester Orchestra way, with the rest of the record steeped in darkness, as Hull questions his place and fear of becoming a father.

“This is temporary, I just heard I’m gonna be a dad
… Would you marry me? Repeat repeat
There’s no clarity tomorrow
I’m not even trying to swat those demons away from me”

What sets A Black Mile To The Surface apart from their catalogue is the middle leaven of the album, which sees ‘Lead, SD’, ‘The Alien’, ‘The Sunshine’ and ‘The Grocery’ all merge into one song like a brooding emo version of All the Glass Handed Kites by Mew, culminating in an attempted suicide in a grocery store. This is another tool utilised to paint a more concise, thematic way of writing an album, and since working with filmmakers The Daniels (who directed music videos for ‘Simple Math’ and ‘The Sunshine’ for the band) creating the music score for their debut feature Swiss Army Man, Hull and McDowell obviously assimilated and incorporated their cinematic knowledge into A Black Mile To The Surface. With the departure of keyboardist Chris Freeman last year, McDowell stepped into the role, simultaneously maintaining regular lead guitar duties, adding a different shape and dimension to the framework of the record. The slow piano melody in ‘The Alien’ could easily have been taken from La La Land, which was a nice surprise.

A Black Mile To The Surface is the culmination of ten years of ascending from the blind adit of mining and crafting the mineral veins to produce musical gold with every offering of boundless riches from the Plouton paragon that is Manchester Orchestra.