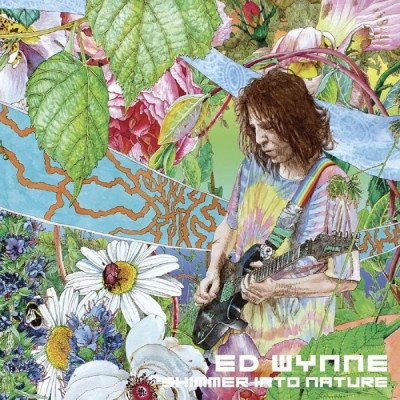 Shimmer Into Nature by Ed Wynne

It seems incredible that over multi-instrumentalist Ed Wynne‘s nearly four decades of writing and playing, he has not released a solo record before now. The hopefully temporary dissolution of Ozric Tentacles, the band which Wynne has been the cornerstone of for over three decades now, has led him to release what could easily have become the next Ozrics album under his own name. Consequently, it probably won’t come as a shock to discover that Shimmer Into Nature is very much in the inimitable style of Ozric Tentacles.

Solo records fulfil different functions for the musicians who make them. Quite often, they are a means of releasing material that might be quite different to that made by the bands in which the musicians spent their time. Shimmer Into Nature is not one of those records: this feels very much like an Ozrics album. The chief difference here is that Wynne plays or has programmed almost everything on the record (barring some percussion and electronics).

The album consists of five tracks, each eight to ten minutes in length. Ozrics albums tend to feature a mix of short and longer pieces, featuring a wide variety of moods; here, though, Wynne is in playfully reflective mode throughout. His nimble guitar and synth playing surfs along on a propulsive rhythmic bedrock built around gliding bass parts and percolating drum parts that ebb and flow as each track unfolds. Opener ‘Glass Staircase’ slowly develops from a repeated synth pattern into a gently kaleidoscopic showcase for Wynne’s swirling synthwork and effortlessly melodic guitar soloing, which take turns under the spotlight. It sets out the stall for the record’s mood: reflective, even dreamy, but never dull. There’s always a great deal going on, the level of detail almost fractal in a sense, where your attention is drawn to patterns within patterns as the music unspools from Wynne’s fertile imagination.

Whilst the mood set out by this opener is maintained throughout the record, each track showcases new facets of Wynne’s playing. ‘Travel Dust’ is less relaxed, with excursions into dub reggae and soaring lead guitar; the delightfully named ‘Oddplonk’ is spacier, its pattering drum parts overlaid with effects-laden soloing. ‘Shim’ is nimbler, built upon a busy warbling synth part and propelled by Wynne’s restless guitar, whilst the closing ‘Wherble’ draws together the album’s elements to set the controls for a truly extraordinary ten-minute voyage to the heart of the sun.

Wynne’s playing is always incredibly sensitive to the material: on occasion it borders on outright shredding in its speed and intensity, yet never once crosses the line into self-indulgence. This, then, is Wynne’s secret weapon: his great respect for atmosphere and the emotional component of his music. He is keenly aware of when too much is too much; like a skilled painter, he applies his colours to his artwork impactfully but sparingly.

Shimmer Into Nature will feel instantly familiar and welcome to Ozrics devotees: it’s not an experimental record, but – as perhaps is always the case with anything Ozrics-related – a gently exploratory one. This music is not so much written as grown, possessed of the anything-goes spirit of improvisation that the Ozrics have been synonymous with since their early days, yet refined into an irresistible, purposeful collection of music imbued with a strange sense of peace. Wynne himself says that his aim in making the record was “to transport the listener to a place where the everyday ups and downs of the world dissipate, leaving the mind free to wander through a colourful, omnidirectional guitar and synth driven musical landscape for a while, landing eventually, hopefully freshly charged, with a smile and a calmer spirit.” This it does. In spades.

If you’re already familiar with Wynne’s work as the guiding light of the Ozrics and the various permutations and offshoots of the band, then Shimmer Into Nature is probably best described as another chapter in one of your favourite books. If you’re new to Wynne’s output, then the album is a reliable indicator of the new musical world that you’re opening yourself up to: kinetic, yet unhurried; modern, yet strangely timeless; indulgent, yet purposeful. Wynne’s music is full of contradictions, yet perhaps this is why it continues to appeal to such a wide demographic: rockers, ravers, punks, proggers and jazz fans are all just as likely to find this musical voyage to their liking. Simply erptacular.