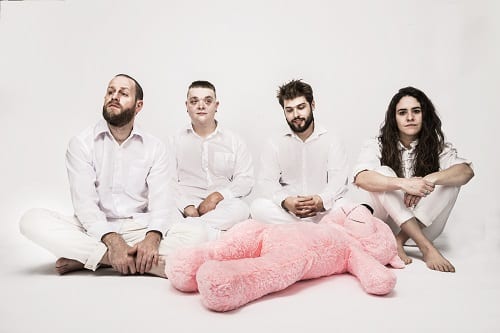 It’s not often, well never, that we get asked to host the video for half of a whole album but that is what Portland, OR base post rockers Childspeak have produced.

When we enquired as to why the band had taken on such an enormous task, they said  “We’re all very visual people, so in the band we have this character named Thirst that we use to help personify emotions and situations in a way without words, but still able to portray complex situations or emotions. He’s in a lot of our light show, and he’s on the cover of our first album, so it made sense that he could ultimately serve the same purpose in our music videos. Nick Greene, who plays Thirst, was also the assistant engineer on the record, and we really wanted to keep it all in the family, so it was great to get work with him again in a new, totally different capacity.”

“Aliigator Ballet, when it was originally being visualized, we wanted to just use shades of red to convey the nuances of spite, scandal, and rumor. It was sort of like, ‘if you’re going to dance with the devil, you better make it Alligator Ballet…’ but what we ended up with conveys the same thing with a less cliched, more interesting visual narrative, and it’s cut up with our footage playing in Sam Gehrke’s studio.”

So sit back & soak in the full 17 minutes of glory.