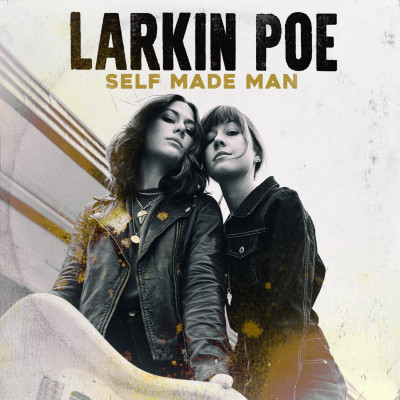 Self Made Man by Larkin Poe

Larkin Poe, for the uninitiated, are a bluesy, roots rock outfit, originally from Georgia, formed by sisters, Rebecca and Megan Lovell. The sisters began performing as teenagers along with older sibling, Jessica, as the Lovell Sisters in a bluegrass outfit, but they disbanded in 2009 and the two younger sisters formed Larkin Poe, named after their great-great-great-grandfather who was a relation of Edgar Alan Poe.

Of course if you’re a fan of the blues genre then you didn’t need that introduction as the band have made a bit of a name for themselves, with their last album, Venom & Faith being nominated for a Grammy, and outside of their increasingly successful bands career the ladies have backed luminaries such as Conor Oberst and Elvis Costello.

So why then are they singing, as they do on the (sort of) title track of their new LP that ‘She’s A Self Made Man’? Well, it could be that they still consider themselves to be fighting for equivalence in the sometimes stuffy, sausage-packed world of blues rock. The band are certainly happy to sing from the male perspective in their lyrics, but you get the feeling the sisters are also having a little dig about what it takes to make it in their chosen oeuvre. So while they are celebrating their obvious success they are aware that they have had to conduct themselves in a manner which is seen as masculine, aggressive and cocky. This may largely be pseudo-intellectual theorising on my part however, as the grooves within the album are largely just that, grooves, good time, happy, radio-friendly commercial rock music.

That aggression I mention is certainly evident across the songs here though, with Rebecca’s powerful voice, the deep whomp and thwack of the rhythm section of Tarka Layman (bass) and Kevin McGowan (drums) and Megan’s needling, freewheeling lap steel guitars. Right from the off on ‘She’s A Self Made Man’ the band attack in a manner not dissimilar to The White Stripes, although Megan’s sympathetic, soulful backing vocals remove any grungy garage rock edge and the polished production envelopes you in a reassuring warmth.

It does seem that the album is front loaded with all the best songs and second track ‘Holy Ghost Fire’ is the pick of those. With a verse that sounds, bizarrely, like ‘Godzilla’ by Blue Oyster Cult, the tune is none-the-less a mean, swaggering country soul barn burner. Once you get past the urge to sing “History shows again and again how nature points out the folly of men. Godzilla!”

Several songs, including ‘Keep Diggin’’ show the bands bluegrass roots with minimal percussion, hand claps doing most of the rhythmic work, with once again, a hugely powerful vocal performance from Rebecca. Indeed you won’t find any sultry, broken-hearted barroom laments on Self Made Man and as the album progresses it does attain the air of a slightly disappointing singles collection, as the pace keeps up but the quality lags.

‘Back Down South’ is one of those eulogies to the southern states and its music that bands that from that region are fond of, which I have to say I find mildly irking. I’m sure it’s meant with the best of intentions but we know how these things can get co-opted and also, once you’ve heard ‘Southern Rock Opera’ by The Drive By Truckers why would you even bother to go there, when it’s all been said and done by the best? Anyway, it’s another rip-roaring, bourbon flavoured rocker which will have you strutting across the floor, like a rooster on heat. Turn it up loud and try not to think about the rednecks.

The next tune is another solid gold slice of radio rock. ‘Tears Of Blue To Gold’, is an uplifting, gospel-style number, the lyrics a fuzzy, sweltering remembrance of childhood. It is irresistibly good-natured and one of the most perfectly crafted moments here.

The second half of the album, whilst not poor, is just more of the same with a little less charm. It’s not like you’ll switch off, and there is a attractive darkness in tunes like ‘Every Bird That Flies’ that will keep you gripped, it’s just that the effervescence of those early songs seemingly cannot maintain over a full album.

If you are a fan of the band you will want to buy Self Made Man, and I guarantee that if you hear one of the singles on the radio it will lift your spirits for four sweet minutes. If you are a blues novice then it’s still worth checking out, best played loud on a sunny day on a car journey towards a socially distanced good time.