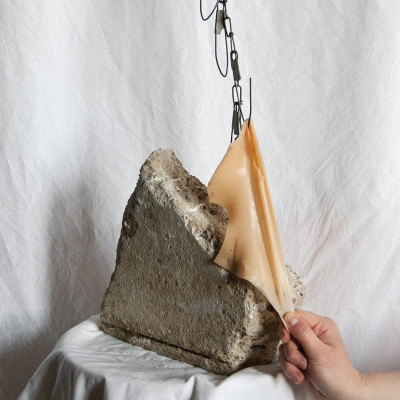 An integral part of the industrial and experimental scenes during the unwinding of the 20th century, Drew McDowall lent both his sonic nous and his penchant for magick to the cults of Coil and Psychic TV before striding out on his own. He’s spent the past decade collaborating with and remixing the likes of Rabit, NIN, and Uniform, as well as Posh Isolation stalwarts Croatian Armor, Puce Mary, and Varg (the latter now known as Varg2™ after some legal wrangling) whose glassy electronic explorations seem to have left a few fingerprints across McDowall’s own work for Dais Records. In particular, on this latest release – Agalma.

Agalma is under the spell of time. I mean, if you were to read McDowall’s press release, you’d be led to think that it was formed out of ideas of ritual, ceremony, and sacrament. And, in many ways it is. But it’s also an album informed by, created from, and eager to destroy time as an abstraction. Listening to it, we submit to the whims of the artist. We’re manipulated, misled, and toyed with as sounds speed up, reverse, stretch out.

This is most apparent during the latter half of the album. The acoustic instruments that so dutifully colour the beginning are, by the time we reach the 6th track, lost within digital treatments. A haze of buzzy, frazzled drones. They warble and reset. Terrestrial rumbles from the deep clash with sword-sharp glinting edges. The creaks are less animal, more machine. Then, on ‘Agalma VII’, alongside a flurry of guest appearances (and this record is star-studded, by the way), glassy strings seem to replace the electronic wizardry. It’s an ensemble piece that wrong foots us with its intentions. Manipulation, here, is rife. Time, again, is McDowall’s plaything. Ominously down-pitched toms slap. Auto-tuned vocals challenge the humanity of the human voice. Squeals & screeches are wrought out of innocent notes. Eastern influences are processed through Western technology. Is this a commentary? Or is the stick that I’m holding the wrong way round?

And then we have the penultimate track ‘Agalma I (ft Maralie Armstron-Rial)’ which is a sort of warping of the almost identically titled opener (albeit replacing the guest spot with ‘Folding’). Initially it appears to be a replica of that first track, giving the sense of the album folding in on itself and completing the circle. Thirty seconds in and Armstron-Rial’s vocals reveal that it’s more akin to an upgrading of it. Adding in a human voice, an extra human element. He’s diverged from the comfortable cyclical blueprint and veered off at the fourth exit on the roundabout. Through this record, Drew McDowall seems on a mission to destroy our expectations of time. We think that we are experiencing the same thing but it’s only notionally similar. It’s a funhouse mirror conflating, exaggerating, and ridiculing itself.

Well, exactly what you’d hope for – it sounds like a new beginning. Strings tighten, a glockenspiel pads along, disembodied voices are sucked back into speakers. It’s like gentle stirring of life or morning shuddering into existence. Petals unravel, stems stretch out, time slows to a saunter and the world opens itself anew to a slowly warming day. This sense of beginning or birth continues on ‘Agalma II’ with an airy call from Caterina Barbieri soothing a rummage of notes. There’s something celestial about it. Like watching a re-alignment of planets. It calls to mind the collision and entanglement of particles in Malick’s Tree of Life. The emergence of all that we are via a dwarfing, daunting event. An occurrence of the most epic proportions that consists of tiny gullies of activity gurgling and twinkling. Stars blinking into fact.

Further down the sonic timeline we get snake-like stirrings. Gentle purring. Animal & physical but non-violent. ‘Agalma II’ is worried, concerned yet still curious. Like the wolves from Ben Frost’s By The Throat having been patiently calmed. Visceral creaking alongside string surges. Shafts of life push out of the primordial soup, green shafts wend towards the light. The undergrowth is growling. Then, in a couple of simple steps we encounter strobing electronics like remote-controlled drones rising and falling and a zonked-out beat that is somehow reminiscent of Surface to Air Missiles. This record takes us, in a matter of mere seconds, on a journey from earthly nothings into long range warfare. It’s detached. Almost psychopathic.

It’s at the centre of the album, however, that the aforementioned concept of the sacred clashing directly with electronic tampering really rears its head. Here, on ’Agalma V’, we get the excellent Kali Malone (along with Barbieri, Malone is a fellow member of the formidable XKatedral collective) on riveting drone organ duty. The more earthly notes that proliferated throughout the front half of the album are infiltrated further here by fizzing synthetic sounds. Shimmers seem like a trick of the ear. Beginning and end points fuse. A battleground between the ecclesiastical and time erosion arises. A swish of the head causes it all to blur together. Pulsing confusion. Warping reality. Malone’s thrumming organ underpins all of this. It’s as if she’s attempting to straighten the madness with the sanctity of ritual and worship. The chanting gets louder, more high pitched. It’s desperate to be heard. Long, languorous notes persist amidst the cacophony. A messy swirl of differing voices, each with their own agenda. They rally hard against one another, attempting to curb and control. Things get weirder, alien, even. They have to. Still Malone’s organ persists. Claiming its place as the final victor.

Given the baffling sliding of hours and days into weeks and months since the world caught the pox, this certainly seems like a timely (ahem) offering.