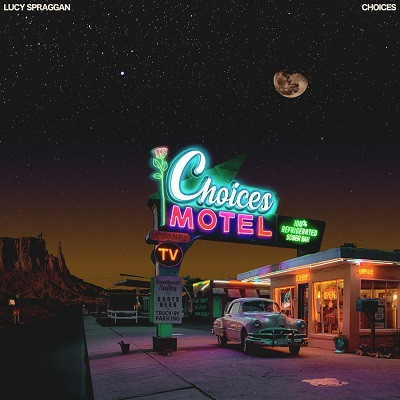 Randy Newman once sang, “Listen to the band, they’re playing just for me/Listen to the people paying just for me/All the applause – all the parades/And all the money that I had made/Oh, It’s Lonely at the top.” The song dealing with fame, hits home for plenty of the people who are struggling in the music industry by making it to the big leagues. Once you reach the peak of fame and fortune, it can come down on you really hard. And then, all of a sudden, the tabloids can come at you like a pack of wolves, ready to attack its prey.

For Lucy Spraggan, she wants to spread her wings and fly away from the struggle she went through. Not just through the tabloids, but to move away from being typecast as the person who went on The X Factor in 2012. Her sixth studio release on Cooking Vinyl release entitled, Choices, which is a follow-up to their 2019 release, Today Was a Good Day, offers an insight by reading Lucy’s scrapbook. It’s not just about what she went through between the alcoholism and her divorce, but it becomes a spiritual journey that she takes us on this hardship to come back strong. It is a task that she goes through by not reaching the light at the end of the tunnel, but to find her inner self.

‘Run To The Hills’ is a cross between Laura Veirs rhythm section on ‘Icebound Stream’ and Rush’s ‘The Spirit of Radio’ as Lucy runs to the misty mountains to be free from the craziness that is going on in the outside world with some lukewarm foot-stomp’s and hand-clapping temptation. She is signing to the gods and know that nothing’s going to stop her now. ‘Roots’ tackles shopping like crazy. And we all know how that can make us our own worst enemy when we buy stuff at the malls or on Amazon and shop as if we’re batshit crazy! Lucy doesn’t need all of that stuff. She has us on her uplifting train chugging arrangements with a Steven Wilson-esque sing-along groove from the Hand.Cannot.Erase sessions.

She goes into this Italian Psychedelia period on ‘I Spent a Night In The Desert’ as if the Arcade Fire had done a score from the film-noir atmospheres of the 1950s. It deals with what happens when we leave this Earth and go into the afterlife. No matter what happens, throughout the thick and thin, you always want to remember the good times you had between the past, present, and future.

When you listen to ‘Sober’ you can imagine Lucy is fighting back tears throughout the song as she had to go through the struggles to finally put the bottle down. It deals with being your own worst enemy and learning that alcohol can be your deadly partner in crime. I felt a little tug for Spraggan tipping her hat to the late great Nick Drake with his swansong release, Pink Moon.

The opening track ‘Flowers’ is Lucy honoring the Man with No Name trilogy from the Clint Eastwood character as she is following in his footsteps to keep his legacy alive as she channels the spaghetti western themes in the song with an Ennio Morricone theme while she dances to the beats with a futuristic Bollywood vibe on ‘Animal’. With its thumping tabla percussions and clapping sequences, it is Lucy bringing the church down with a sermon that they’ll never forget.

Choices was a challenging release. While I’m such a stickler for challenging albums from the realms of Metal, Avant-Garde Classical Music, Jazz, and Progressive Rock, Lucy Spraggan has taken the pop genre to a whole new level through various forms of music. She is like a conductor and a storyteller brought to life. And this album isn’t just about Lucy’s story, but plenty of others who are in the woods that are going through the same problems that she went through.