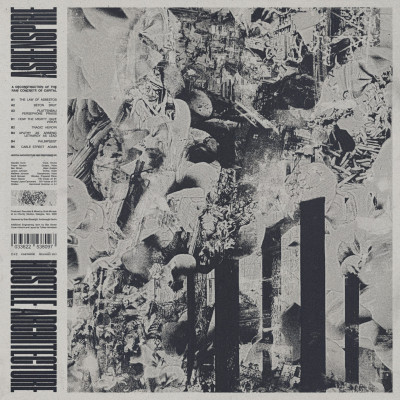 This one was brought to the group by metal editor Sander van den Driesche and just from hearing ‘Tragic Heroin’, I was hooked. The first thought I had was that Ashenspire sound like Scotland’s answer to Oranssi Pazuzu, not that I have any idea what music has influenced this album. I find myself drawn to anything maximalist and from even the most cursory listen, it’s pretty clear that Hostile Architecture brutalises the listener with intensity at every available opportunity.

The inspiration for the album emanating from repulsion at the dizzying heights of modern capitalism, which have seen a historical wealth gap inform economic civil war amongst all but, the billionaires. Austerity itself has seen the government simultaneously fuck the poor and point the finger at them. Starve people and blame their greed. Put them on the streets and hate them for making the cobbles dirty. This album explores the vehement lack of humanity in a ruling class that looks at the problem of homelessness and sticks spikes in the ground, not to feed hungry mouths but, to avert offended eyes lest anyone see the real problem. It’s common for us to preach tolerance and acceptance and yet, a conservative ideal hinges on an I’m alright Jack mentality that says “things are fine the way they are because they work for me”. We have a nice forty hour, nine-to-five working week and we have our health service and we have our sick pay and our holidays, we have all the things afforded to us by socialism that stops capitalism from working people to fucking death. So, it’s fine. We have grown up sat in a field of pneumonia, never dreaming of shelter because the delirium passes the time, whilst across the river there’s a whole village of people living under shelter. Are you doing the best you can? Is this the sum of your imagination?

‘The Law of Asbestos’ opens the album with a hypnotic ostinato, I couldn’t work out which instrument specifically was playing it, but it’s fucking grim. As the rest of the band starts spilling into the dirge, I feel particularly at home in this sound. Anyone who’s ever heard my band Burden Limbs before knows I fucking love misery. Straight away bands come flooding to mind like Her Name is Calla, Low, Dead Can Dance and Amenra. I don’t know if any of these influence Ashenspire, but their misanthropy and hopelessness definitely reflect in the band’s instrumentals. The vocals on this opening track, as well as the later tracks are consistently venomous, when all these shitty lite post-punk bands try and play the orator with their half-baked prose and kneecapped screaming, this is what they’re trying and failing to achieve. Unrestrained, unbridled rancour.

It’s a shame a lot of the charm of this band will be lost on a generation that has grown so accustomed to this increasing popular big band set-up. Ashenspire is not of its time though, I don’t think this album will age badly. In fact, I think it’s timeless and fucking brilliant. The sounds spewing out of the guitars and strings and brass sections are bleak in a way that for me scratches a long unscratched itch. The lyrics and the vocals are absolutely incredible, the way the singer barks “this is not a house of amateurs, this is done with full intent” with full passion vigour, the whole work feeling like one massive theatre piece, hitting the listener like a freight train. I can feel the blood rushing to his head and making his head spin as he screams that line. The refrain speaks for itself: “Only three months to the gutter, never three months to the peak, another day you’ll grind your fingers for the simple right to eat, only three months to the gutter, never three months to the crown, another breath of asbestos in a god forsaken town, only three months to the gutter, never three months to the top, another set of fucking homeless spikes outside another empty shop”. To write something that simultaneously politically stirring, poetically crafted and powerfully bleak is not only rare but, fucking awesome, but then to sing it with such raw, earnest integrity is an unfortunate rarity. It’s largely through that charming idiosyncrasy that Hostile Architecture has immediately impressed itself upon me as one of the best albums I’ve heard in years. I would be astonished if I enjoy any album more this year. If you’re a miserable cunt, do not miss this one.

The sophomore entry is ‘Béton Brut’, what the fuck happens here? The start of this track is bonkers. Instruments just start noodling in like a rainfall of broken glass, it sounds like they’ve gotten every instrument in the known universe and started throwing them out of a plane whilst someone else flies passed with a microphone. I love it. I’m not even gonna attempt to work out what’s playing what in any of these songs. The individual components all add up to a magnificent universe of dread. The vocals come in like a pain thinner hallucination screaming and crooning nauseatingly, the lyrics are fucking awesome again. “I wasn’t born in fear, there’s no self-loathing in my genes, but from when I could hear, I heard the hereditary. The poison of misogyny, an amateur way of cross-traversing the trip wire of masculinity. That’s how it works, to have you dance! I learned the steps before I could walk, I am silenced before I could talk”. I find it extremely cathartic, I read recently that when someone screams it activates a fear response in our brains. I wonder if people who like to listen to screaming find it be a safe way of processing a childhood full of screaming and terror? I like screaming.

‘Plattenbau Persephone Praxis’ is the next entry on the album, the drumming seems to get more spotlight in the mix for this track, especially with the cymbals cutting through with a lot of ping. I think one of the great things about the drumming is that they’re not trampling on any of the music, when they need to be simple they are and when they have space, they shine. How the fuck do you sing and play drums like that? Think of the bands that have pulled this off, Lightning Bolt, Evil Blizzard, Taman Shud, whenever a band sits next to these three comfortably, you know they’re brilliant. The saxophone gets a lot of spotlight here as well, rippling like a brass puddle, the production and performance are incredible.

‘How The Mighty Have Vision’ begins with a choir chorus, when the main vocal comes in, it actually does a hell of a lot to show Dunn’s range. It helps him stand out amongst the growing number of frontmen talking and shouting and talking and shouting and talking and shouting. Very occasionally streaming. Dunn is able to do a hell of a lot more with his voice than most singers and the album features a rich diversity of vocal performances. One such performance can be seen on ‘Tragic Heroin’, that song was the first track I heard by Ashenspire and it blew me away. The chorus “no great men, only the great many!” Immediately stood out to me as a great line and a great performance, not only that but the vocals explorative in their sound. There’s melody and passion and emotion that is rare to find. The band through a mixture of razor tooth guitar playing, ominous keys and ferocious drumming are able to succinctly dunk the listener’s head under water for a little over three minutes. An impressive display of misanthropy.

‘Apathy As Arsenic, Lethargy As Lead’ immediately reminded me of Dale Barclay and his final band And Yet It Moves. Their tracks ‘Bad Cops Bad Day Off’ and ‘Ketamine Ma’am’ really sit nicely alongside Ashenspire. I don’t think And Yet It Moves ever really got to the level that Ashenspire are on in their nascent days which is really tragic because the songs I named are incredible, Dale was one of the most electrifying frontmen I have ever seen, I saw The Amazing Snakeheads twice by mistake and both times they blew the headline act out of the water (Cerebral Ballzy, The Jesus and Mary Chain). Amphetamine Ballads remains one of my favourite albums of all time. Took a bit of a detour there because of the vocals but, instrumentally speaking I love the fucking snare rolls on this song and the entire band spiralling into a thunder storm alongside it. Their performance is consistently mind-blowing.

I think ‘Palimpsest’ begins as the most metal sounding track on the album and then somehow ends up being the most prog track on the whole thing. A classic bait and switch. I think having the guitars more choppy and everything else more sparse and fluid on this track is a good call too, it just allows everything to sit a bit further apart so as the listener you can hear the layers a bit more separately.

Sadly, ‘Cable Street Again’ is the last song on the album and quite possibly my favourite song on Hostile Architecture. It reminds me a little bit of ‘Control Systems’ from GNOD’s Infinity Machines, an absolute masterpiece triple album. Paddy Shine is a good comparison for Alastair Dunn’s style in some respects, they’re both able to very skilfully comment on politics with an informed and honest subversion, whilst also displaying a ton of heart in the process. Around the two minute mark, Dunn’s vocals demonstrate intimate vulnerability and naked emotion, polarising against the blistering primal roar and empowered triumph that follows. I think this music will probably lost on a lot of people but, if you enjoy a nice emotional rollercoaster propelled by heartfelt trauma, give it a spin, I’m sure you’ll love it. The strings in this track swing like a blade. The closing vocal to this album hits with the intensity of a psychotic neighbour, screaming red in the face: “This is where it ends, there’s no middle road, I tell you, get down off the fence before the barbed wire goes up”.

Hostile Architecture is a brutal examination of the harsh realities of capitalism, delivered in earnest and with immense sonic precision. If you like your music manifest with great depression then Ashenspire is the band for you. Album of the year candidate for me.