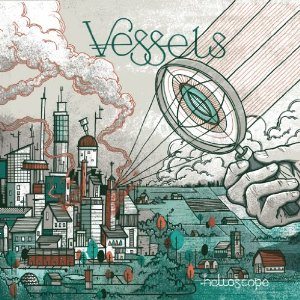 Massive, just massive. That’s the feeling one gets from listening to ‘Helioscope’, the second album from Leeds based auditory sculptors Vessels. Massive in sound; the production is awesome, giving the band a huge canvas on which the band paint their sonic masterpieces, the drums are especially well captured giving an immensely solid sounding base for the rest of the band to leap off from and driving the sound forwards powerfully, and massive in scope and ambition; the nine tracks here explore wide and varied areas of the Post Rock territory.

These guys often get compared to the usual Post Rock standard bearers; Mogwai, 65saysofstatic and the like, and while there is no doubt that those bands are an influence, especially the complex rhythms of 65days are reflected on tracks like ‘The Trap and ‘Later Than You Think’, Vessels have a sound that is very much their own. To me it is darker, rounder and bluer than the sonic spikiness of bands like Mogwai, but that probably doesn’t make a lot of sense to anyone who doesn’t live in my head.

All the classic Post Rock hallmarks are there; beautiful super slo-mo sections, pounding drums, huge builds, cascading breakdowns; the aforementioned ‘Later Than You Think’ is a particularly fine example of all of these, but there are also moments, as in the utterly wondrous ‘Meatman, Piano Tuner, Prostitute’ assisted by the plaintive vocals of Stuart Warwick, of the kind of emotive soulfulness that can be lacking in the genre. Spine tingling.

Another radical departure from the standard Post Rock template is ‘Recur’, it’s like a proper song with verses and choruses and everything! This may not seem that remarkable to the lay person but when you listen to as much Post Rock as I do your perspective on these things gets somewhat skewed, that ‘Recur’ also manages to be one of the stand out tracks on the album is testimony to the talent and imagination of these guys.

As good as all these tracks are, probably the grandest flourish on the album is the penultimate ‘All Our Ends’. Eight glorious minutes of epic, soaring intensity, it builds from a gentle, almost folksy, start until the breakdown half way through when it suddenly takes of and heads for the stars, the result is mind melting.

‘Helioscope’ is very much the sound of a band coming of age and pushing back the boundaries of an occasionally moribund genre. More power to them. 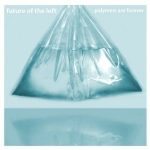 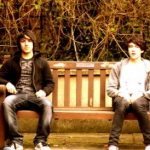