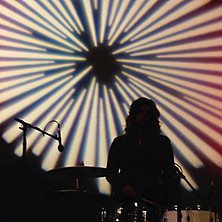 So, what can be said about Low that hasn’t already been written chapter and verse? For nine albums over nearly twenty years now Alan Sparhawk, Mimi Parker and a selection of bass players have been ploughing their truly unique furrow through the music business, in the process creating some of the most staggeringly beautiful music this listener has ever heard.

I’ve given ‘C’mon’ plenty of time to bed in, ‘Drums and Guns’ took me some time to appreciate in its full glory, and it has been worth it. As ever, Low’s songs are layered with depths of subtlety that a cursory listening would not reveal, they need patience and attention but it’s worth the effort as they payback many times over.

Opener ‘Try To Sleep’ is actually one of Low’s more accessible moments, which I imagine is why they’ve been using it to trail the album, trademark gorgeous harmonies float over the top of a slow pounding beat and glockenspiel melody. ‘Try To Sleep’ very much sets the tone for ‘C’mon’ which on the whole is a much warmer, more embracing album than its immediate predecessor, with touching moments of what sounds like real emotion between the husband and wife vocalists.

Ironically though, it’s perhaps the moments when they lift themselves out of the niceness and turn to the dark for a while that are the most affecting parts of this album; ‘Witches’, strident and powerful with hints of a Neil Young-esque discordancey in the guitar playing, and the deeply melancholic ‘$20’, with its plaintive refrain of ‘my love is for free, my love’, are both chilling and deeply moving.

It’s not to say that the other tracks are any less brilliant, the meditative wash of ‘Done’, the gently uplifting ‘Nightingale’ and almost anthemic closer ‘Something’s Turning Over’ especially, but those two stand out in terms of their emotional load.

However, the standout track on the album is without doubt the hugely epic, eight minute opus ‘Nothing But Heart’ which builds achingly slowly from a simple guitar under Sparhawk’s vocal until it swells and swells until it bursts in to a magnificent climactic, chorally backed, Spectorish wall of sound that is utterly uplifting and enervating. As good as anything they have ever done.

With ‘C’mon’ Low haven’t really broken any new ground, in fact they may have even regressed slightly to what they know after the patchy experimentalism of ‘Drums And Guns’ but frankly I don’t care because they do what they do better than any other band on Earth and that’s good enough for me.

Top tracks: ‘Nothing But Heart’, ‘Witches’.