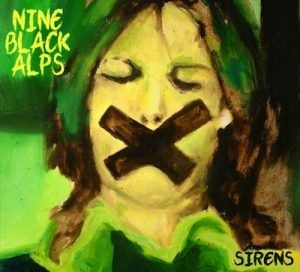 Formed in 2003, Mancunian Post-Grunge/Indie Rock quartet Nine Black Alps are back with a new album, new bassist, and newly signed to Brew Records. The aforementioned album is entitled ‘Sirens’ which is, without a doubt, 12 chaotic tracks of cacophony; reminding fans after three years of silence that they still have the drive and the passion to get noticed. However, as much as the album is an enjoyable and amiable listen, it doesn’t matter how many times I’ve played it, I’m still not sure if I’ve felt fully alert and revitalized, more so steam-rolled into a state of repetitive sound where sometimes tracks blend together without giving much room to breathe.

Ironically fitting for this review, there is a track called ‘Don’t Forget To Breathe’, and I would strongly suggest you take this advice during your listening process, for don’t be surprised if you are haunted by a strongly Nirvana-esque influence. The previously mentioned track in particular packs a punky punch with sinewy guitar riffs, a clatter of cymbals and distorted vocals that quite frankly, I worry if your constitution is a little weakened, would go straight through you!

‘Be My Girl’ is catchy enough, although more of a mainstream number that I wouldn’t be surprised if you heard on the next hip and happening television advertisement for deodorant or a new brand of car.

Three tracks in particular stood out for me showing Nine Black Alps are truly talented despite not always getting the recognition they deserve, and that they can and will make their own boundaries and step outside of the restraints of the genre. ‘Phosphorescence’, is a special track with haunting harmonies and although comes with a somewhat eerie sound, it really is a beautiful track with deeper lyrics than the heavier numbers.

Similarly to this is ‘Waiting Room’ a radiant song featuring acoustic guitar that not only lets the lyrics do the talking but makes room for a mesmerizing solo which really is a nice release from the intensity of the rest of the album.

Then there’s the closing track ‘Another World’ which melodically takes you to another world where Kurt Cobain lives on and is tapping you on the shoulder.

Despite my concerns about the album, I’d like to end by reverting to ‘Penny Cinderella’ lyrics; “I might be less than you expected, I might have thrown it all away”, Nine Black Alps are still going strong and a perfect reminder that there are diamonds in the grunge.

Out now on Brew Records.