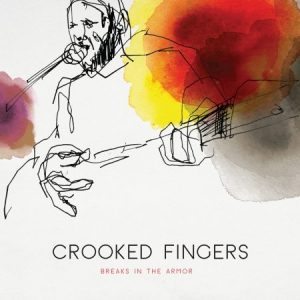 Having taken some time out after the 2008 self- release of “Forfeit/Fortune”, Archers of Loaf frontman Eric Bachmann has made an unexpected return with a sixth album, Breaks in the Armor’ under the alias of Crooked Fingers via Merge records. Should you be aware of any of Crooked Fingers back catalogue over the past thirteen years and their rotating line up, the first thing that hits you when listening to this album is how Bachmann has grown and matured as a lyricist, relying more predominantly on raw emotion, passion and nostalgia through his words rather than larger than life orchestrated instrumentation familiar to previous albums especially when comparing to their first self-titled album released in 2000.

Yes, unsurprisingly after all his experience in the music industry over the past two decades, Bachmann has grown as an artist and this is evident in the stripped back, laid bare, subtlety of the album, that seems to suggest that the “breaks in the armor are more important than the armor itself”.

Opening with ‘Typhoon’ was a good choice. It is instantly apparent that Bachmann has well and truly let his guard down. This track starts off with gentle understatement but oozes raw feeling, emphasizing Bachmann’s emotional turmoil in the intensifying guitar patterns, and coupled with Liz Durrett’s enchanting harmonies, Bachmann’s grizzled throatiness reminds me of a wounded bear carrying sentimental lyrics such as “Lover says to me I can love you now / How I loved you then” and “See the ghosts of all your old, forgotten loves / Seems as though they never come to show you what it was that did you in again”, making it an unforgettably relatable track.

Then there’s ‘Bad Blood’, a more rocky/country Tom Petty-esque number which riddled with electric guitar, and noisy cymbal clashes tells a weary tale of regret and lose of hope where Bachmann addresses a fortune teller to inform him what the future holds whilst acknowledging past grudges “Years rolling by eye for an eye all I can see now is the damage
done” and past mistakes “If what you do comes back to you we’ve got a lot to be afraid of”.

‘War Horses’, poses as a darker ballad featuring drum beats that at first reminded me of slowed down, stripped bare version of Queen’s ‘We Will Rock You’. However, that is the only similarity. This track is one of few on the album that features Bachmann’s familiar use of instrumentation to give the listener a break from the intensity of the lyrics. He also makes use of the album title within these lyrics when he wails “My breaks in the armor, it’s too much for us to turn back now“.

Overall, whether up-tempo or down-tempo the album is filled with variety and although essentially it’s broken and it’s beaten like Bachmann’s armor, each song come across as tiny little pieces of light after darkness with their own voice and style. It’s personal, it’s gritty, and most of all it is cut you to the core honest. Best enjoyed wearing your heart on your sleeve with a bottle of whisky and a cowboy hat.

Breaks in the Armor is out now and available through here.