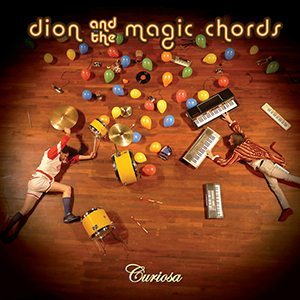 Dion and the Magic Chords

Out now through Laterax Recordings

Innocence. It's a lovely thing isn't it? A carefree understanding of the world, unfettered by the trappings of the modern world or adulthood. It's exactly the feeling that sprang to mind when initially hearing Dion & The Magic Chords' new release, Curiosa. It's a feeling reinforced by the album artwork, which appears as a still frame which could easily be from an imported Polish stop-motion animation from the 1960s. It's as much a statement as the music: a toy-like explosion of colour and instruments, some of which are home keyboards of 70s/80s vintage; two marionette-like musicians acting as the source of this carefully choreographed chaos.

Throughout the course of the album, one can make connections to danceable jazz, some blues riff-age, naive sonic experiments, krautrock dronery, 60s/70s British public information films and archetypal 'lift music'.

There's always a knowing innocence to this though. As the album progresses, we are transported from child-like simplicity with 'Prelude' and the first few bars of the next track, 'City Light Motion'; via an electronic jazz-blues workout, to the stand-out track, 'Curiosa'. Here we encounter rhythmic elements of samba with some strident chord-work and distorted leads. The track builds and shifts, as does most of the album. Rhythmic passages segue and overlap, the keyboard drones become stabs of chunky chords. There's richness and depth to this music, of both sound and structure.

'Bloose' develops into a lovely, thick slab of arpeggios and chords. 'Sehnsucht' starts out all epic repetition and develops into a sonic nursery rhyme. Then another beauty of a track: 'Seasaw' starts out all Boards of Canada and then gets into serious Tangerine Dream territory with saw-wave arpeggios and lush pads. Closing track, the magnum-opus 'To The Moon….And Back', gives us a past vision of the future and then takes a darker turn with synth drones and odd squiggles of sound.

So, after all this wordy bollocks, is it any good? In short, yes. Very good, in fact.

DATMC are walking a relatively well-worn path previously occupied by the likes of Stereolab, Plone and Broadcast; but they are doing so with considerable skill, invention and good-humour. The tracks exhilarate, entertain and evoke. You can't ask for more really. Impressive.