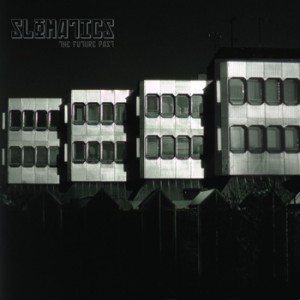 Released through the band's Bandcamp site

When writing about Belfast sludge behemoths Slomatics, it’s almost impossible to steer clear of cliché. Terms like “wall of sound”, “earth-shattering”, “un- yielding” and “sludge behemoths” (ahem) spring far too easily to mind. Yet however cringe-worthy they might seem, every single one of them is completely justified by, and omnipresent on, their latest effort The Future Past.

Available through bandcamp as a digital-only release, the aptly named collection serves as a stopgap release between last year’s seminal A Hocht and an as-yet un-named new record, scheduled for late 2013. Consisting of two vintage tracks, the first Slomatics song ever written and a track from “their previous lives” (according to their Facebook), The Future Past incorporates everything that’s made Slomatics a force to be reckoned with over their illustrious career so far.

Simultaneously, the new (old) material sees them continuing to explore their new-fangled love for LFO textures and electronic integration, and as always the attention to detail in the sheer depth of this production is meticulous. I know wall of sound is a clichéd term, but this record takes it right down to its bare form, with a low end is so thick it feels a physical presence all of its own.

While ‘Running Battle’ is pretty much classic Slomatics, slow, crushing and monstrous, special attention must be paid to ‘Son Of Ampbreaker’ for its foray into the uplifting. Not in the traditional sense, but in the “medieval army charging into battle” sense (and let’s face it, that’s the best kind). It makes me want to run up to the top of the nearest mountain (Cave Hill for any North Belfast readers) with my homemade broadsword and fight some goblins!*

Newcomers to this three-piece will never believe in a million years that two guitars can be so god damned heavy, while veterans will lap up the bludgeoning, almost concrete solidness of this unrelenting aural barrage. Either way, it’s £2 very well spent. Who the hell needs a bass player?!?

*NB: There is no proof of the existence of goblins up the Cave Hill. Nor do I have a homemade broadsword. Yet.