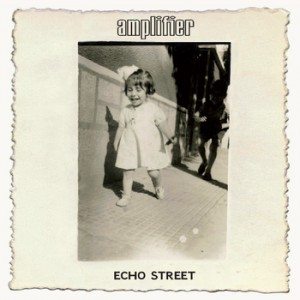 2011’s The Octopus represented a huge step forward for Amplifier. After two albums of trippy heavy rock, the Manchester band embraced their prog leanings for a two hour opus. As brilliant as that album is, it can be a struggle to take in at one sitting, just logistically, never mind musically. Echo Street can be seen as their reaction to The Octopus - more concise and direct, it loses none of its predecessor’s grandeur and delivers some of their best tracks to date.

Reflected by its title, Echo Street is the sound of a band learning from its past, revisiting its origins but feeding these data into something new. Several of these songs have been modified from jams in the early ‘90s, years before they released their debut. As leading light Sel Balamir puts it, they have been “put through the Amplifier prism”. The results are mesmerising and, in some instances, surprising.

The slowburn of the opening track, ‘Matmos’, becomes a raging bonfire over its eight minute duration. Immediately this sounds like classic Amplifier but with a fire in their bellies to keep forging forward. The loose, improvised beginnings of a track like ‘Extra Vehicular’ imbue the music with an organic flow. Balamir describes it as one of the band’s “journey” tracks. Surrender to the wave and it will send you crashing and breathless onto the land with its stunning denouement.

By contrast, the middle section of the album is dominated by more song-based material, often employing acoustic guitars. ‘Where the River Goes’ has had me reaching for the repeat button on several occasions while the cinematic ‘Paris In The Spring’ has a latter-day Marillion feel. Initially this quieter side of Amplifier was a little jarring after the bombast of The Octopus but subsequent listens have revealed the songs’ gentler charms and intricacies. Most importantly they represent a band that is self-aware enough to not retread its footsteps.

This is easily the most diverse album Amplifier have released so far. Seemingly by echo location they have probed into their history and uncovered several new and intriguing directions as a result. This will prove to be an extremely important album in their development as they have created a number of possible futures for themselves while retaining the DNA of those formative years.