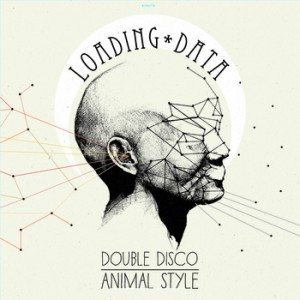 They are a three piece band that originated in France and have been on the music scene since 1999. In that time they moved to America done a extensive tour and worked with some very impressive people. Double Disco Animal Style is their third album.

This is an album full of great guitar riffs that even Tony Iommi would be proud of and some well written songs. There is also a guest appearance from the legendary Nick Oliveri. That in mind there is no denying the very similar sound to Queens of the Stone Age.

When I first listened to this album I was surprised by the very distinctive vocals. This was not the voice I had expected to hear but it became evident that this guy can sing. In fact Loading Data are a very polished band that will have your feet tapping and if you still have that tennis racket around I feel it may become the imaginary guitar from your childhood.

'Butterfly Shelf', this song offers a steady beat with a hypnotic keyboard that really drives this track along. All the instruments and vocals blend well. This is when the album really starts. Play it next to 'Midnight Situation', which makes a nice combo.

The track 'Gift' is similar to the Classic TV show the Munsters but when you hear the lyrics you quickly realize that this is not about family entertainment. Just play it loud!

If you want a couple of songs that offer a touch of Marilyn Manson, Queens of the Stone Age but still distinctively Loading Data then 'Alright' and 'Armageddon' will keep you happy.

My last track I want to point out is 'Hanging Low'. I love this track. The vocals work brilliant together. Nice heavy guitar and flowing drums and bass. Oh did I mention the lyrics? Very classy!

Double Disco Animal Style really grew on me, there are some great and quirky song on this album. I feel it will do really well.