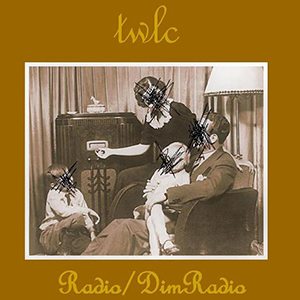 Out now at Bandcamp.

Twlc are a Welsh electro/dark ambient band with a musically minimalist approach. Twlc (which is Welsh for Pigsty) intend on 'taking electronic music back to post punk basics'. The band's new six track album is entitled "Radio/DimRadio". The tracks have an unsettling creepy atmosphere due primarily to the distorted/pitch shifted vocal samples and dark eerie synth sounds. There is some light within Twlc's material however. The music still provides ample catchy melodies that range from soft and propulsive to jagged and harsh.

The album starts off strongly with the track 'cof' (memory) which is largely dark ambient with some minimal drums. Midway through 'cof' some interesting and ominous vocals are introduced over the haunting synth rhythm. Next is 'mwnci' (monkey) with its prominent vocal loop that sounds like the wailing of a tortured soul. 'mwnci's' synth melody is catchy and the track has some crashing snare to propel it along. Twlc certainly evoke imagery from horror films and is probably what vampires would listen to during dinner. I'm not sure what to make of the track 'mam' (mum). The synth sound is awkwardly pitchy and jarring like an alarm and the industrial-ish vocals seem uncharacteristically menacing and repetitious. This track didn't seem to fit the vibe the other five tracks share on "Radio/DimRadio".  Perhaps it's an ode to 'Mother' akin to the Police?

Fortunately twlc return to a well balanced synth/sample mixture with the sullen sounding track 'ail' (second). 'ail' is a solid track that introduces some delicate yet somber piano near the end of the track which finishes the song beautifully. 'lwp' is hypnotic track with a curious vocal loop and a shrieky synth melody. Again twlc effectively introduce a light piano melody midway through the song. I found the sum of the vocals, synth and piano on 'lwp' to be quite compelling. 'lwp' seems unwilling to end as the ghostly synth reluctantly fades out. The final track llif (flow) begins with some stomping piano keys that sound mournful and bleak and lead into a twisted off-key piano melody. While the piano creeps along, a sample of what sounds like a man crying unnervingly rolls forward in the background. A very chilling ending to this dark synth ride.

Those desperately seeking some dark and sinister synth, oozing with macabre vocal samples will be at home with twlc. "Radio/DimRadio" at its best delivers music that is simultaneously ominous and beautiful, catchy and creepy. A noteworthy second release by twlc and a convincing follow-up to their first release "Mochyn".