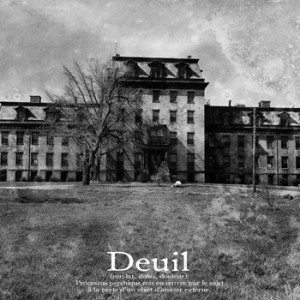 "And the chanting shall bring forth the darkness, and the darkness shall envelop the mental landscape, cloaking all in black, until the end of days..."

Belgian band Deuil has created a record that is more a meditation on mourning (with a soundtrack) and less what is typically thought of as a "normal" release. Acceptance/Rebuild is a two track study in experimental Black Metal, with elements of sludge, drone, doom, and even shoegaze thrown in for good measure. The results are quite creepy, and just as successful.

The first epic track, 'Acceptance,' is 20 minutes long. It begins with dark chants. It gradually escalates to a mid-tempo gloom, introducing pounding drums, ragged vocals, and crushing guitars. It falls into a calm before the storm around the six-minute mark; a nice, lulling melody. Blast-beats follow; churning, twisting. Recorded samples create a sense of desolation. Guitars ring out; dissonant and haunting. It ends, leaving behind a feeling of relief... or an empty sadness.

The second track, 'Rebuild,' is half as long as the first, but just as epic. It too begins with chants. Guitars and feedback enter the mix, along with the pounding of drums. Dissonance yet again. It builds to a frenzy and the cycle starts anew. The vocals come in late, layered with a blast-beat. Another grimey success. Deuil's Acceptance/Rebuild is a very impressive self-released record. The effort alone is commendable. Everything was recorded live in the band's practice room by Mélan. So much energy and atmosphere was captured using this method. It was mixed and mastered by Trung. All in all, it is a very interesting—and quite cathartic—record by a few extremely talented Belgians. Find out for yourself. It's available now through the band themselves.

Deuil is vehemently opposed to NSBM (National Socialist Black Metal). They thought this fact was worth mentioning. I agree.