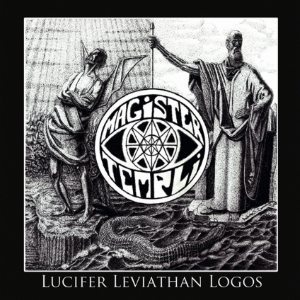 The New Wave of British Heavy Metal (NWOBHM) must have been such an exciting time for the people who were there at the start of it all. So many talented bands emerged—or simply became more well-known—during the years of 1978–1984; bands like Blitzkrieg, Saxon, Angel Witch, Satan, Diamond Head, Iron Maiden, and Motörhead. The sound was darker, tougher, and faster than the more blues-based roots of the first round of British Invasion bands. It was a mixture of rock and punk, and the kids ate it up. Oslo's Magister Templi is continuing in the footsteps of such bands. Their debut full-length Lucifer Leviathan Logos captures a bit of the magic of a golden age of heavy metal.

The members of Magister Templi definitely have a special place in their collective heart for the NWOBHM bands, as well as bands who came directly after the second British movement; early doom bands in particular. Lucifer Leviathan Logos has epic, galloping guitar runs reminiscent of Mercyful Fate, early Trouble, and Pentagram (see 'Lucifer' and 'Master of the Temple'), grand guitar harmonies ('Logos' and throughout), solid acoustic passages ('VITRIOL'), and theatrical (read: over-the-top) vocals throughout (best when not trying to nail higher pitches; the attempts to do so come off clumsy and extremely forced). With time the vocals might be on-par with the superb instrumentation. Hopefully.

Occultism is a running theme, as it was with a few of the more doom-laden bands of the early '80s. Bands such as Angel Witch and King Diamond embraced these ideas with much success. Magister Templi uses these same themes and succeed in not sounding overly campy, (however, the vocals do detract a bit).

All in all, Lucfer Leviathan Logos is a successful record. Musically, it is spot-on. Vocally, it could use a little work. A little more control over pitch changes/shifts would do it. Any fan of the NWOBHM movement should check it out and judge for themselves.