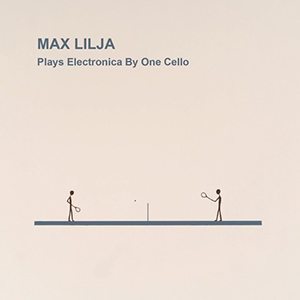 The overall sound of the album is refreshing and unique. The cello has such a moving and distinctive voice throughout the album and it expresses a diverse range of tones, moods and feelings. The cello's voice sings loudly because a vocalist doesn't. All the songs on Plays Electronica by One Cello are instrumentals. I found the pairing of cello and electronica works quite well. The electronic music creates a perfect musical canvas for Max to paint evocative scenes with his cello. The album clips along quickly with ten tracks clocking in at just over 34 minutes with all the tracks under 4 minutes long. The "loop album button" on your device, computer or stereo was meant for Plays Electronica by One Cello.

The album kicks off with the crisp and clean 'I Sound My Sound'. A catchy opener that blends an engaging cello melody alongside a groovy electronica beat. There are some darker tones that creep into the album however. 'Now' is a crunchy dark track which is accented by a reoccurring somber bell. Equally prickly is the bassy track 'Like This' and sinister kung-fu flavoured, tension filled 'Qualified'. It is a deeply evocative track and conjures a different scenario in my mind every time. By contrast "A State Of Mind" is mellow, gentle, light and tranquil, much like the track 'The End'.

The album alternates back and forth between the lighter and darker tracks, slower and faster tracks creating a very inviting flow. Max impresses with all the various voices he creates with his cello. The electronic end is consistently well paced and complimentary. While the music is light at times it is never dull and Max adds extra effects or instrumentation often to create a variety of compelling sounds.

Occasionally I could sense the heavier edge of Max's background lurking in the mix wanting to poke through but it never does. Perhaps one day he'll release Plays Metal by One Cello...

Plays Electronica by One Cello is an impressive and innovative merging of musical genres. Max Lilja utilizes electrified and acoustic cello to illustrate the versatility and potential of the instrument in modern music. The album is catchy, convincing and begs to be replayed. Those looking for slick, melodic, addictive electronica blended with the unique tones of a cello may never take Plays Electronica by One Cello off shuffle on their stereo. Give this a spin.