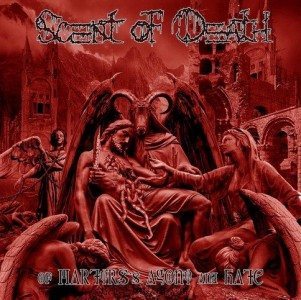 Of Martyr’s Agony and Hate is the second album from five-piece, Spanish, brutal, tech/ death metal band Scent of Death (currently signed to Bloody Productions). Formed in 1998 Scent of Death, have seen several changes in line-up, and waited six years between releasing their first 2005 album, Woven In The Book of Hate (that I’ve not been able to get my hands on) and the recording of this follow-up album in 2011.

After completing the mastering of the album in 2012, Of Martyrs's Agony and Hate was released through Pathologically Explicit Recordings this year. Consisting of nine, dark and grisly tracks that are hard, fast and frantically complex, ultimately defining that in short, it is quality and not quantity that takes precedence in relation to the direction Scent of Death have been travelling in over the last fourteen years, and the level of blood, sweat and nightmares that presumably - if this album is anything to go by - have gone into their recording process.

The album begins with ‘Awakening Of The Liar’ which as far as its intro goes may as well be the noise you’d expect to hear when you’re screeching open the gates of hell. As the unpleasant ghosts and ghouls of the past are fully awoken and unleashed, I’d suggest you run for your puny insignificant lives ahead of tightly wound brutal tech that will pummel the fu(ck) out of you if you stand still too long. Then there’s ‘The Enemy of my Enemy’ with creepy, sinister growls, and impressive blast beats and shredding it’s kind of like inviting a sped up version of Cradle of Filth and DragonForce to a party and having them endure a heated argument with one another via the medium of sound. Or to be less imaginative, think in the “eat your heart out and devour it” style of Morbid Angel.

Even the slower paced tracks on the album hold no mercy being just as impressively stifling and intoxicating still holding the tenacity to evoke the anti-Christ. Look out for ‘A Simple Twist of Faith’ for a daily dose of “this is what happens when you wake up a raging beast.” and the very much needed interlude “The Sleeper Must Awake” for melodic instrumentation that goes to show however brutal/technical/outrageous these guys are, they are so much more than growls and beatdowns. Fans of Immolation, Morbid Angel, Cannibal Corpse, come out of your caves and grab a copy, this album’s for you. Finishing thought: If this is what hell on earth sounds like…I kinda like it.